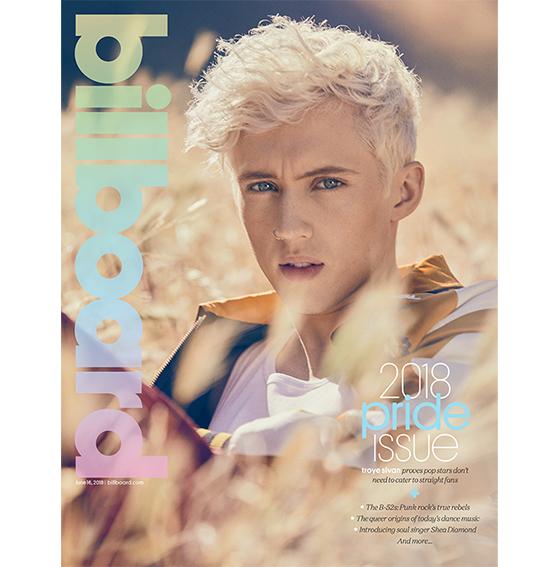 Magazines are celebrating this year’s Pride Month with a number of magazine covers, editorial and partnerships dedicated to the occasion.

Every June, Pride Month commemorates the 1969 Stonewall riots that sparked the gay rights movement, and celebrates the LGBTQ+ community.

Billboard published its first issue dedicated to Pride this week, with openly gay teen singer Troye Sivan on the cover. Sivan discusses gay culture, his past relationships and upcoming collaboration with Ariana Grande in the feature story.

Billboard's annual “30 Days of Pride” series,  sponsored by American Airlines, asked a number of pop culture celebrities to write love letters to the LGBTQ community. Among those participating were Jason Mraz, Meghan Trainor and Carole King.

Out magazine teamed up with retailer H&M on a campaign called “#ProudOutLoud” to share the empowering voices of Gus Kenworthy, Kim Petras, Shaun Ross, Gabrielle Richardson and Aja in a number of videos and social posts.

Muñoz will host “Legendary,” an interview series profiling people who are making an impact in the LGBTQ+ community.

He will also help develop content surrounding LGBTQ+ issues for NowThis, such as workplace discrimination and homeless LGBTQ+ youth.

“We want to elevate the voices that are too often left out of the discussion and remind everyone that none of us are equal until we are all equal,” stated Muñoz.

Muñoz will also take over NowThis’ Instagram Stories during the NYC Pride March on June 24.

Magazines are taking the opportunity to publish articles about Pride Month as well.

Variety did a story on the top films and TV shows centered around LGBTQ themes available for streaming on Netflix, Hulu, Amazon and HBO.

Shape wrote about breweries in Seattle celebrating Pride Month with “glitter beer”: Highly Verotic Pale Ale, brewed with citra and mosaic hops, with a spoonful of edible glitter mixed in.

Some brands have also updated their logos temporarily: Entertainment Weekly changed its usual white lettering on a black background to a rainbow-colored version.

But the letters “EW” over a rainbow aren’t as effective a gay pride message as the brand might have hoped.