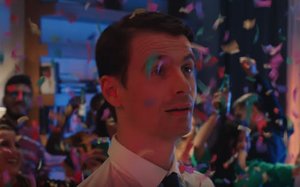 As one might guess from its tagline, “Cheers to the Unexpected,” Heineken’s latest campaign celebrates embracing spontaneity and unexpected twists in our lives.

The U.S.-led campaign, from the brand’s lead creative agency Publicis Worldwide New York, is the first under the direction of new Heineken USA CMO Jonnie Cahill.

Spanning television, digital and outdoor ads, the humorous campaign is based on U.S. consumer insights — specifically, that “Heineken drinkers thrive for spontaneity, and those who embrace it are happier in life,” according to the brand.

“Freddy Heineken said, ‘there’s always something happening around a beer,’” said Cahill. With the new campaign, “we’re showcasing how beer and Heineken can bring people together, and raising a glass to the surprise moments that make life worth celebrating.”

This one depicts a young man accidentally attending a wild house party, instead of the stiff dinner party on the floor below, to which he was invited. After a house-party guest welcomes him and exchanges his wine for a Heineken, he throws himself into the experience. Message: “Sometimes the wrong party is the right one.”

A second spot, “Introduction,” will begin airing June 19, for the World Cup tournament. Heineken has been sponsoring soccer for decades, and one of its goals is to help spur the growth of the sport in the U.S.

This ad tricks the viewer into thinking that a man and a woman have spotted one another amid a crowd, are gazing longingly at one another, and about to connect. But when they stand up and cheer along with the rest of the crowd, we see that they were actually intensely focused on watching a soccer match in a sports bar.

Another new spot will debut during the summer, and a fourth around the holiday season.

Two more spots are will debut and air through the end of this year.