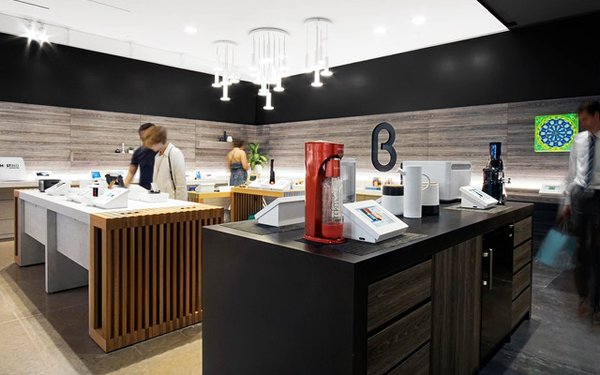 Macy’s, proving its commitment to rethinking what it means to be a department store by shaking up what it offers shoppers, is teaming up with B8ta, the tech-powered retailer.

Macy’s says the deal, which includes buying a minority stake, is part of its plan to find new ways to enhance in-store experiences, using B8ta’s software platform in The Market @ Macy’s, which it launched earlier this year. Now operating in 10 stores, the pop-up concept is a way to offer new brands to its shoppers, add variety, and give the Cincinnati-based retailer more insight into what trends are most appealing.

“Macy’s is in the experience business,” says Hal Lawton, president of Macy’s, in the announcement, adding that the new partnership “will allow us to scale The Market @ Macy’s concept faster, furthering our goal of bringing more excitement and fresh experiences into our stores.”

B8ta, which started in 2015, with stores in San Francisco, New York and Santa Monica, Calif., aims to help customers try and buy new products, while putting those who make the products in more control.

Macy’s says that it plans to test new format spaces, powered by B8ta, as well as pump up some of the existing pilots.

B8ta and Story have given observers plenty to say about Macy’s plans for the future. And its most recent quarterly financial report, released last month, surprised Wall Street with its strong performance.

In addition to gains in fine jewelry, dresses, handbags, and furniture, “digital growth remains strong and was up double-digits in the quarter,” writes Paul Trussell, who follows the company for Deutsche Bank. “International tourist sales significantly improved, and were up nearly 10% in the quarter.”

Still, department stores face many challenges, both from better-performing e-commerce rivals, especially Amazon, and more appealing niche brands. And Macy’s is still vulnerable to risks that “include a consumer slowdown, elevated markdowns, and greater than anticipated expense headwinds.”