We Are All Pod People Now 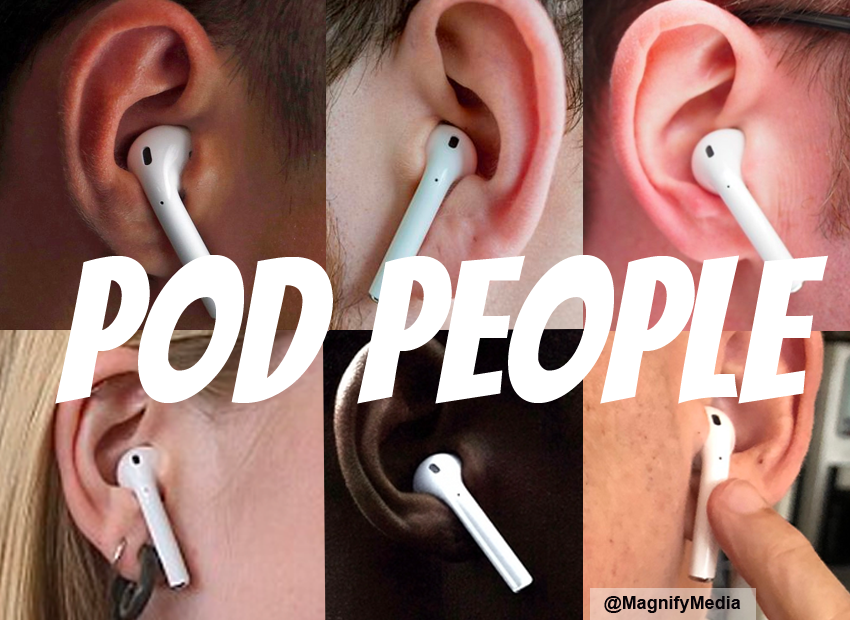 Why? Because I’ve created a private, portable, personal bubble of sound. It blocks out traffic noise -- which is delightful -- but it also blocks out lots of basic, human, polite interaction.

It is a harbinger of things to come: of immersive media replacing the world around us. That seems both inevitable and troubling.

So you think I’m overstating things? Maybe. AirPods are just a Bluetooth headset, and they’ve been around for a while. But AirPods are different from other headsets in some very specific ways.

They’re not particularly elegant, with their white stem hanging out of your ear -- like Apple headphones where someone has snipped off the cord.

They’re kinda geeky, but also kind of amazing. The case charges the buds. When you put one in your ear, your iPhone notices, and there’s audio -- magically. If you tap on the Bud, it pauses audio. Fantastic. Lot’s of groovy features that make you think back to simpler days, when Apple gear just worked, with grace and elegance.

Oh, and did I mention they’re relatively cheap: $159?  When I went in to buy mine a few months back, there was a whole rack of Bluetooth headphones, and the AirPods were out of stock and back-ordered. I asked the sales guy, “Is there another one I can get?” He smiled and said, “No, just wait. It’s worth it.” He was right.

Well, maybe, but at least in my neighborhood, the number of people with little white sticks hanging out of their ears is growing exponentially. And since you don’t know if they’re actually listening to something or not, it’s hard to know how to address them. Do you speak to a Pod Person? As a Pod Person, do you pause the audio when someone speaks to you, or do you remove one of the AirPods?

At the risk of being discourteous, I tend to remove one, performing an act that says “I can hear you now.” For the moment, that’s where polite conversation and social stigma diverge.

Certainly, though, those white sticks won’t last for long. Perhaps the next iteration of the AirPod will fit snugly inside your ear, invisible to all but the keenest observers. Then what social signaling tools will we have to be able to alert others that we’re tuned in to music, or a call, or a podcast? Because being tuned in to media means being tuned out to our surroundings.

It’s easy to notice people walking down the street, lost in their handheld phones. But in the new era of voice assistants like Siri, Alexa, and Google Assistant, the elegant and easy adaption of the AirPods might actually be the next big thing, as we find ourselves connected from morning till night to devices that keep us tuned in to our digital network.

But the questions the AirPod raise go far behind the technology. It makes me wonder where the line is between my physical self and my digital world. Can I be in two places at once? I’m walking down the street in New York City, while at the same time fully engaged in Bob Garfield and Brooke Gladstone’s latest edition of “On The Media.” Am I multitasking when I plan my subway ride around my podcast listening habits, or am I replacing the experiences of my neighborhood and my co-workers with Bob and Brooke’s mellifluous tones?

Which brings me back to guilt. In the late afternoons, I’m called to the service of my two wonderful, but needy, dogs. They’re hounds, and they need to go and sniff out the local “nose news” of the day. For a bit, I tried walking them and listening to a podcast. But I couldn’t do it. I was disconnected from my day dog journey -- and that didn’t feel right.  So, at least for now, the dog walks are conducted sans AirPods.

Are you a Pod Person? If not, it may just be a matter of time.

apple, audio, iphone, mobile
3 comments about "We Are All Pod People Now".
Check to receive email when comments are posted.
Read more comments >
Next story loading