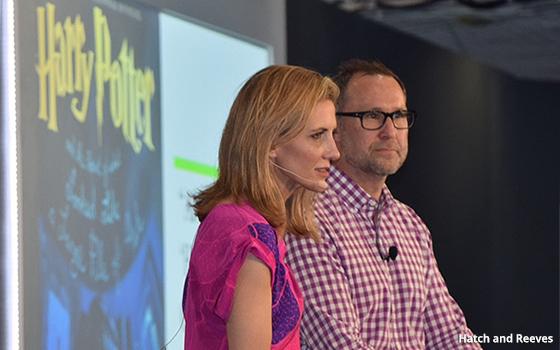 Artificial intelligence is a big industry issue right now although it is still early days in terms of figuring out optimal ways of putting it to use.  One early session at the Cannes Lions Festival on Monday featured Alicia Hatch, CMO, Deloitte Digital and Anthony Reeves, former executive creative director, Amazon who discussed how and whether Artificial Intelligence can transform the creative process.

It’s been tried, in some cases with laughable results, as with last year’s AI-written chapter of Harry Potter in which Ron Weasley attempted to eat soulmate's Hermione's parents.

But Reeves believes AI has great potential to revolutionize the traditional agency brief. Right now, agencies rely on "instinct" or data-driven processes, which typically use information to develop the final solution.

AI-driven briefs, on the other hand, said Reeves, start with the customer and work backward. "Starting at a place of truth makes big difference about problem solving," he says.

Deloitte Digital compared the traditional brief with an AI-driven one and came up with what its believes are a number of interesting insights. For one, AI removes a significant portion of the “skepticism layer,” says Hatch. Agencies are often unclear about their client's intentions and AI gets everyone on the same page. You can't BS your way through AI information.

AI also enhances storytelling to produce more diverse ideas, according to Hatch. Deloitte's research found that AI briefs versus traditional ones had a larger number of narrative arcs, breadth of ideas, as well as a broader tone of overall imagination.

"When you got this blank sheet of paper and go old-school, you are paralyzed with that white page," says Reeves.

Speed is of the essence and Deloitte Digital says AI accelerates the speed to concepts. And AI improves subjectivity "by the simple fact of sheer numbers," says Hatch, eliminating the need for creatives to pull from things they know or from existing “bags of tricks,’ as well as focus groups or opinions. "Using data driven facts, we can eliminate our own bias and perceptions to focus on what is true," says Hatch.

Collectively, AI-fueled briefs in the Deloitte Digital comparison enhanced diversity and increased the number of ideas generated by 57%. This isn't science fiction," says Hatch. “If you break AI down and apply it practically in your process, "you will see the impact."