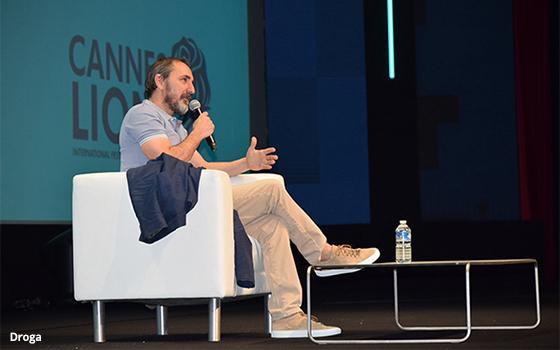 Last week the world chattered about what many considered an ill-advised decision to change the name of IHOP to IHOb to promote its burger offerings.

The man behind this media stunt, a newly full-bearded David Droga, sat solo in a white chair for the first presentation at the 2018 International Festival of Creativity to chat about his 30-year career. Unfortunately, however, both for attendees and those watching his talk via the live stream, Droga's presentation didn't even address this creative execution.

Festival organizers haven't officially disclosed total attendee counts for this year, but it appeared every third person in attendance is part of the Young Lions school, or an aspiring talent.

His monologue started by ticking off the points of his biography — he has four brothers, he grew up in Australia — before dispensing life lessons that may resonate (or bore) most listeners. "Good intentions, talent and ethics will plow through anything," he says. "If you put your chips into something you believe, you have to roll the dice sometimes."

Droga discussed his unhappy tenure at Publicis and how it led to his eponymous agency Droga5 (the story goes that as a kid his mom would sew ‘Droga5” tags into some of his clothes for proper sorting; he had four brothers).

"If you are a creative person and you aren't having an impact on the actual creative, it's not worth it. You are paid twice a month, but have to go to work every day,” he told his audience.

His agency has a "strong point of view" and identity for a reason. "Agencies shape and shift to fit the situation," he says. "A lot of times that isn't [for] the clients [sake] but the agency thinking they have to be something."

Still, he admits things haven't always gone according to plan in recent times. Droga said he had to take a "long hard look" at his agency's ethos. In February, and the agency gave the pink slip to about 40 staffers in New York — approximately 5% of its total agency — in what the shop calls its first-ever mass reduction of the agency's 12-year history.

He assumed that his culture of purpose and empathy would trickle down to all employees, but he now realizes that "it is our job as leaders that people understand what is in it for them."