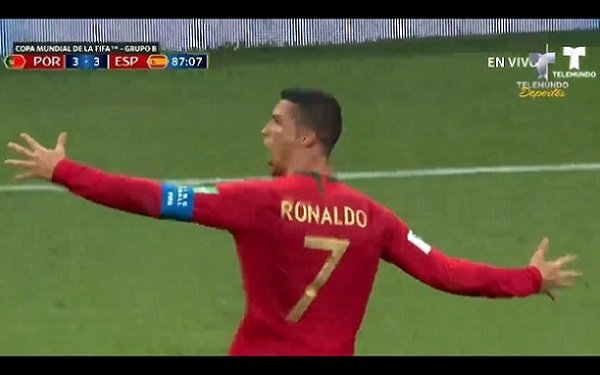 Last Friday night while idly grazing through our TV channels, we stumbled upon the biggest story on the planet Earth.

It was Portugal’s soccer superstar Cristiano Ronaldo preparing to deliver an on-goal penalty kick that would tie the game with his country’s peninsular rival, Spain -- whose team is one of the favorites to win the World Cup this year.

This penalty kick came with just minutes left in the game. The way this kick was done, setting the ball on a trajectory that arched far to the right around the wall of defenders positioned in front of the kicker and then arcing into the goal, was nothing short of mesmerizing. Bend it like Ronaldo.

This shot was so awesome that the Spanish team’s goalie just stood there and stared at it, knowing that it was hopeless to try to stop this thing.

The game was on Telemundo and the commentary was in Spanish. Despite this language barrier, this was one of the most exciting moments seen this year (if ever) on TV.

Not only did the world’s best-known soccer star score the goal that ended the game in a draw, but he had already scored his team’s other two goals in the game -- a hat trick. That’s Ronaldo celebrating the penalty-kick goal in the photo, above.

In the quiet security of our home, we did not hear the sound of millions around the globe either cheering or groaning, but we assumed that roughly half the world’s population must have erupted at about the same time.

And the story dominated various front pages on Saturday morning. We were lucky to have stumbled upon this spectacle, and thereby share in the joy of it -- all thanks to television, which occasionally comes through in this way.

Come to think of it, many of the best moments ever viewed on TV have been sports-related.

May this continue far into the media future -- top sports attractions on real TV.