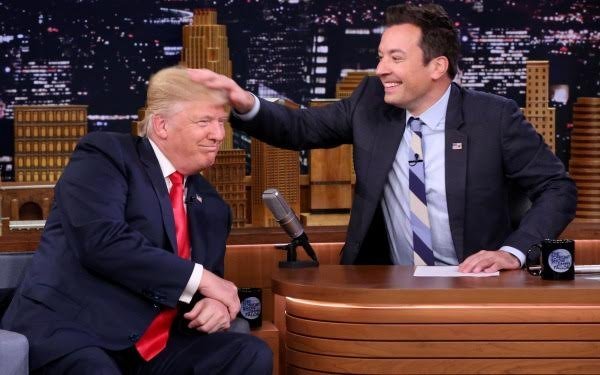 Jimmy Fallon seems to have launched a p.r. offensive to finally address the fallout from his infamous hair-tousling of Donald Trump on “The Tonight Show” almost two years ago.

It was September 2016 -- less than two months until Election Day, and the bitter presidential campaign between Trump and Hillary Clinton was in full swing. In the midst of all that, Fallon playfully reached over and mussed up Trump's carefully coiffed hair.

The hair-mussing came across as too friendly for Clinton's supporters and Trump's detractors. As a result, Fallon was criticized for seeming to have fun with Trump, and by implication, not taking the issues in the divisive campaign seriously enough.

Fallon was even accused by some of supporting Trump's candidacy -- which, if true, would have been a kiss of death for Fallon's career as a late-night host.

Fallon survived the drubbing he received after the hair episode, but “The Tonight Show” eventually slipped out of first place behind Stephen Colbert on CBS, whose attacks on Trump have been perceived as much more fashionable than Fallon's playful approach.

Now, in an interview with The Hollywood Reporter last week, Fallon actually apologized for this innocuous, ridiculous hair-tousling that was taken so seriously by some people that it has resulted in long-lasting damage to Fallon and his show.

“I’m sorry,” Fallon pleads in the interview. “I don't want to make anyone angry. I never do and I never will. It's all in the fun of the show. I made a mistake. I'm sorry if I made anyone mad. And, looking back, I would do it differently,” he said.

So now, our “outrage” culture is so vociferous, judgmental and unforgiving that almost two years after the fact, a late-night comedian has to grovel and apologize for having a little fun with a guest, and also vow never to do it again.

Well, America, are you ready to forgive Fallon?

“I did not do it to ‘normalize’ him or to say I believe in his political beliefs or any of that stuff,” Fallon told THR. “I'm just trying to make a funny show.”

The criticism over this hair-tousle even took a toll on the “Tonight Show” staff, Fallon said. “It was definitely a down time,” Fallon said. “And it’s tough for morale. There's 300 people that work here, and so when people are talking that bad about you and ganging up on you, in a really gang-mentality … You go, ‘Alright, we get it. I heard you. You made me feel bad. So now what? Are you happy? I'm depressed. Do you want to push me more? What do you want me to do? You want me to kill myself? What would make you happy? Get over it.’ ”

In getting Trump to agree that day to let Fallon muss up his hair, Fallon was reacting to the widespread fascination with Trump's complex hairstyling.

So in that context, Fallon asked to touch it -- to have fun with this guest, which is what Fallon does with all of his guests. Fallon is not a political satirist; he's just a comedian who tries to remain neutral in political matters as a way of attracting the widest possible audience.

Once upon a time, that was the tactic most mainstream entertainers adopted. In this divisive era, though, that is not the case anymore.

And here is another thing about that Trump appearance: Donald Trump has had a very long relationship with the New York-based late-night shows going back to the early ’90s on the Letterman “Late Show” on CBS.

If Fallon felt “friendly” with Trump, it was because he had likely hosted him many times before on both “The Tonight Show” and “Late Night.” The fact is (and people who dislike Trump hate to hear this), Trump can actually be easygoing and friendly in these kinds of settings.

As a result, Fallon didn't consider whether his familiar approach to this Trump guest appearance would somehow backfire on him. To Fallon, this segment was supposed to go the same way as all the other times he had Trump on one of his shows.

In the wake of last week's THR interview, Fallon decided he would make a statement against Trump’s immigration policy. So he tweeted Sunday night that he intends to make a charitable contribution to a group that provides legal services for immigrants -- the Refugee and Immigrant Center for Education and Legal Services.

Trump himself then took to Twitter to criticize Fallon. “[He] is now whimpering to all that he did the famous ‘hair show’ with me (where he seriously messed up my hair), & that he would have now done it differently because it is said to have ‘humanized’ me - he is taking heat. He called [after the show aired] & said ‘monster ratings.’ Be a man, Jimmy!”

Meanwhile, when reading these tweets, the rest of us are turning our faces upward and asking: When will it all end?