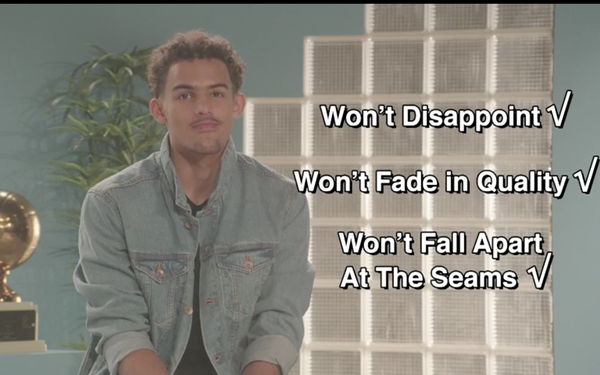 With the NBA Draft just days away, Foot Locker is once again having some fun with the event, this time featuring two hot prospects, Trae Young and LiAngelo Ball, along with comedian Reggie Couz–as stars of their own infomercials.

“We’re coming off a very hot and exciting NBA season,” says Patrick Walsh, Foot Locker’s vice president of marketing, “and we wanted to continue our legacy of bringing some humor to the draft spots.”

Called “One and done,” this year’s campaign hinges on both players’ gap years, poking fun at their short “one-and-done” collegiate and overseas careers. And for the first time, the retailer is using the draft to introduce limited-edition apparel, from streetwear designer Don C.

The spots are aimed at the retailer’s core audience of basketball and sneaker fans, all the way up to post-college age. And while it’s likely none of these kids have ever seen an actual infomercial (any more than they’ve handled a rotary phone,) “’80s and ’90s culture is hot right now,” Walsh tells Marketing Daily. “And while the rest of the world might be upset about fake news, these kids are having fun with fakeness.”

While it’s not as big as the back-to-school season, the NBA Draft still figures prominently in the sneaker world’s calendar. “This is the beginning of what we call summer basketball,” he says. “It’s when players are in summer leagues, developing their game.”

The spots also introduce limited-edition apparel that, like Ball and Young, is only available for one time. The campaign includes an in-the-moment buying mechanism on Instagram, opening sales when the spots go live on Foot Locker’s YouTube and Instagram channels. Foot Locker says it plans to drop more content and clothing later in the week.

While Foot Locker has been having its struggles of late, it surprised observers with an unexpected jump in profits in its most recent quarterly results, released last month. And revenues rose 1.2% to $2.03 billion, while same-store sales slipped 2.8%.

Crediting more selection, CEO Richard Johnson told investors the chain is rebounding. “With the strength of our strategic vendor partnerships and our central position in youth culture,” he says in its announcement, “we continue to believe that we are poised to inflect to positive comparable-store sales growth as we progress through the year.”