Sorrell: Read And Scott Have The Right Stuff To Succeed Him 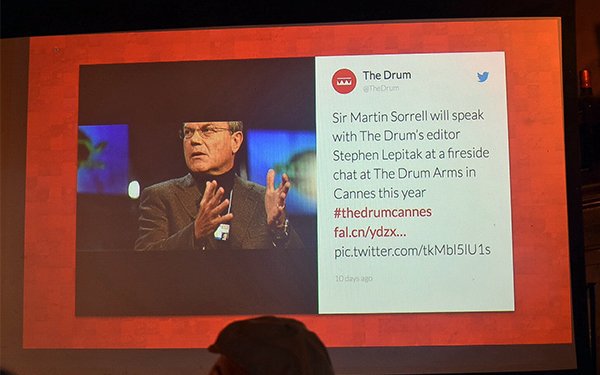 Former WPP chief Martin Sorrell went casual in his first official appearance at the 2018 Cannes Lions Festival of Creativity by chatting with The Drum's Stephen Lepitak at a local pub in Old Town Cannes. He even gave out his email address to attendees.

Sorrell dismissed rumors that WPP wasn't properly prepared for his departure. WPP has had a succession plan in place for "8 to 10 years" in the event "he was hit by a bus or shot" to elevate Mark Read and Andrew Scott to joint-CEOs.

“My view strongly" is that those two individuals have complementary skills, said Sorrell. “One on their own would not be sufficient in my view, but the two together would be a very powerful team,” he says.

His relatively unknown new company S4 Capital is a "peanut," says Sorrell. "We are starting from the beginning" looking at several different business possibilities. The structure of S4 Capital will be "totally different" from  WPP. There is no real difference between the holding companies, he asserted, suggesting none were adequately positioned well for the future.

He finds it instructive that Procter & Gamble asked three holding companies to combine their creative resources under one office in New York to serve the CPG giant. "We think our agency brands are most important, which they are, but clients want the best people working for them," says Sorrell. "If I am paying X million, I want the very best." The downside, however, is that these mega-shops may be "too well-resourced and almost too powerful."

He will be in charge at S4 for at least the next seven years, when he will be 80. At the end of the first term, he will "make a decision about the next cycle," which is written into the documents, he says.

Sorrell spoke at length about how the marketing approach to China needs to be completely rethought and the emerging threat of Amazon to Adland.

After watching the recent mega entertainment consolidations, he believes it is inevitable the holding companies will do the same. He offered that if the still-born merger of Omnicom and Publicis had been completed, “they would have been in a really interesting position."

Sorrell, who has traded barbs throughout his career with Publicis Groupe Supervisory Board Chairman Maurice Levy, said he applauds their current direction. Also, "Dentsu and Omnicom are doing well. IPG still has a way to go." As for Havas, now part of Vivendi, he added, it’s one to watch.  "Their advertainment model is an interesting model."

Sorrell didn't hold back on the leaks surrounding his departure. He denied the salacious gossip, including the latest that he is the whistleblower for the FBI's recent investigation into media-buying practices. "Everything that is being said is ridiculous press frenzy."

He admits his management style may be abrasive. "Am I the easiest person in the world to get along with? Difficult with justification,” he said.

As extensively reported, Sorrell said he can't discuss the WPP allegations, but he thinks the most damaging was the initial leak that broke over Easter weekend. “There has been no investigation to my knowledge over who released that information,” he says. [Many sources point to chairman Roberto Quarta seeking to negate Sorrell's power.] Sorrell himself hasn't requested an investigation, "though I may consider it in time."