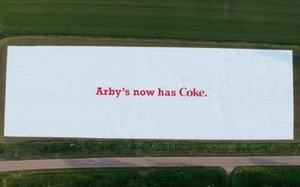 To get the word out about completing its nationwide conversion to offering Coca-Cola beverage brands, Arby’s has established two Guinness World Records, for world’s smallest ad and world’s largest ad poster.

Arby’s teased the “big” announcement by creating the smallest ad on a sesame seed from one of its sandwich buns.

Actually, the ad was created by engineers at Georgia Tech’s Institute for Electronics and Nanotechnology, who used a focused ion beam to etch the words “A big announcement is coming. This isn’t it” onto a seed.

The ad, measuring 735.36 square micron, was displayed in an Arby’s on East 23rd St. in New York City. To view it, guests used a scanning electron microscope.

The town’s only resident, Elsie Eiler — who serves as its mayor, bartender and librarian and has been a lifelong Arby’s and Coca-Cola customer, according to the brands — gave the nod for the ad’s display.

But as she astutely notes in the promotional video for the campaign (below), “They could’ve just made a TV commercial.”

For a limited time, Arby’s is also offering a Coke Float to mark the partnership.