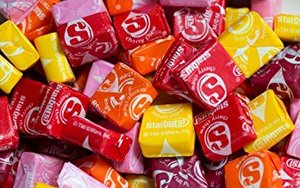 Another small yet odd gesture on the part of President Donald Trump has captured the interest of the media and the public. It involves Starburst candy, two pieces in particular.

According to Ian Bremmer, president of Eurasia Group, at the end of the G7 Summit in Canada — made infamous by the photo of Trump with his arms tightly folded across his chest as world leaders press him to sign an agreement — “he eventually agreed and said OK, he’ll sign it.

“And at that point, he stood up, put his hand in his pocket, his suit jacket pocket, and he took two Starburst candies out, threw them on the table and said to Merkel, ‘Here, Angela. Don’t say I never give you anything.’ ”

There is some chatter on Twitter via the #starburst and #starburstgate hashtags.

The company did not respond to a request for comment by the time this was posted.