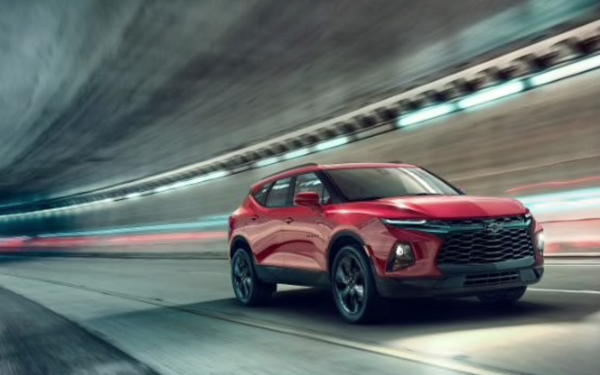 Consumers can’t get enough of SUVs in every size and shape, so Chevrolet is responding accordingly by adding another to its lineup.

Announced at a special event Thursday in Atlanta, the automaker said it is bringing back the Blazer nameplate as a 2019 model year vehicle.

The all-new midsize SUV is rooted in “attention-grabbing design with seamlessly integrated customer-focused technologies and superb functionality,” according to the automaker.

Back in the 1990s, the tagline for the vehicle played up its safety: “A little security in an insecure world.” This was before SUVs were the majority vehicle on the road and it was how the automaker sold the vehicle on an attribute other than interior room. The ads were chock full of special effects that showed drivers — often female— making their way through terrible weather or roadway hazards thanks to the mighty Blazer.

The new Blazer will be slotted between the Chevy Equinox and the Chevy Traverse. It will arrive at U.S. dealerships in early 2019.

“Chevrolet has been at the forefront of each of the major automotive industry trends by anticipating consumer demand and delivering innovative products like Bolt EV, Colorado and Trax,” said Alan Batey, president of GM North America and head of Global Chevrolet, in a release. “The introduction of the all-new Blazer builds on that momentum and further strengthens the most comprehensive lineup of crossovers and SUVs on the market today.”

Described by the automakers as “an SUV with an attitude,” the 2019 Blazer features a wide stance, tight proportions, a high beltline and dramatic sculpting to give it a “toned, athletic appearance from all angles,” according to Chevrolet.

“It looks commanding on the road, while fulfilling the promise of versatility at the heart of every Chevy crossover and SUV,” says John Cafaro, executive director, Global Chevrolet Design.

Each model in the lineup offers a unique look with distinct styling to suit different customers’ tastes, including unique grille appearances, additional bright chrome on the Premier trim and a more sinister-looking, blacked-out appearance for the Blazer RS.

Car buyers love the return of a familiar name, and Chevrolet is picking an ideal time to bring back the Blazer, says Jeremy Acevedo, manager of industry analysis at Edmunds.

"A four-door Blazer is square in line with what shoppers want and what Chevy was missing from its lineup,” Acevedo says. “Chevy’s SUV sales rose 23% in the first quarter of this year, without an entry in the popular mid-size SUV segment. Nostalgia is a powerful sales tool, and will likely prove a winning tactic for Chevrolet.”

SUVs accounted for 37% of Chevy's sales in the first quarter, passing up trucks as the brand's biggest division, according to Edmunds. The strength of Chevrolet SUVs (up 23% from Q1 2017) has helped offset the cooling demand for Chevy cars, which are down 20%. Mid-Size SUVs comprise 15% of the new vehicle market.

GM rival Honda plans to take on the upcoming midsize Chevy Blazer crossover with a new midsize crossover of its own, per GM Authority. According to people familiar with the Japanese automaker’s plans, Honda’s upcoming rival to the Blazer will be called Passport and will slot between the compact CR-V and full-size Pilot.

The original Passport was a variant of the Isuzu Rodeo, and was Honda’s first SUV sold from the 1994 through 2002 model years. Much like the Blazer, the Passport was discontinued in favor or more fuel-efficient offerings.

Other competitors in the midsize crossover segment include the Ford Edge, Nissan Murano and Hyundai Santa Fe Sport.