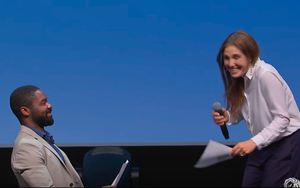 Ad folks may strut from the Croisette into the Palais with a certain degree of swagger, but that doesn’t mean they actually have confidence. But Sun Trust Bank CMO Susan Somersille -- with an assist from Strawberry Frog founder Scott Goodson and award-winning actor David Oyelowo -- provided some tips on how to create and sustain it.

The first part of the presentation focused on some marketing science. The second part was a bit of theatrics, literally.

The session began with Somersille giving tips from what she learned in creating Sun Trust’s “onUp” movement, a long-running marketing campaign designed to give people the confidence to empower themselves financially by having confidence.

“Tuns out there’s a science to confidence and you can even measure it,” Somersille began, adding, “Wouldn’t it be great if you could bottle that up?”

As it turns out, she said, you can. She then proceeded to give Festival of Creativity attendees the formula to do that. The formula grew out of research conducted by Sun Trust showing that “financial confidence is about having control. About having a plan over your money.”

She then outlined three components to it:

1 - Know what matters most to you.

3 - Forget shame and pride, lean on a friend.

She then showed how Sun Trust began executing the insights as part of a campaign designed to spark the onUp movement, which began with a Super Bowl spot in which actor Gary Sinise asked TV viewers to hold their breath until they panicked.

The results reinforced Somersille’s confidence, generating more than 1 million sign-ups to onUp.com in its first year, and 3.4 million to date.

The presentation then demonstrated some confidence-building live on stage, when Somersille introduced Oyelowo. He began by giving attendees a technique to confidently pronounce his name:

“It’s Oh on both sides of yellow,” he said, pronouncing it, “Oh-yellow-oh!”

He then demonstrated confidence-building in a far more visceral way, pulling a young woman who identified herself as “Charlene,” from the audience, and immediately began reciting lines form Shakespeare’s “Romeo and Juliet” with her.

She seemed a bit nervous and confided that “my feet are shaking,” but she did an excellent job. It didn’t hurt that she had a British accent either.

Oyelowo then shared his own personal anecetdote on his journey as an actor and how he gained confidence from others, including his start at the Royal Shakespeare Company. When an instructor asked if anyone had any questions, Oyelowo said, “Please, can you explain to me again what iambic pentameter is.”

“I did that knowing I was going to be ridiculed,” he continued, adding, “but what happened was so interesting. Actors who had been doing it for 20 years, leaned in to listen for the answer. Because the truth of the matter is, we are all on a journey towards learning. And that is what gives us confidence.

The fact that we are able to ask the questions and then learn continually.”

He then huddled with Charlene to give her a tip on how to instill even more confidence in her performance, and returned to reciting lines form “Romeo and Juliet” with her.

After which, he asked her to tell the audience what the tip was that he gave her.

“Imagine everyone naked,” she said. 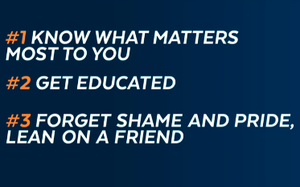