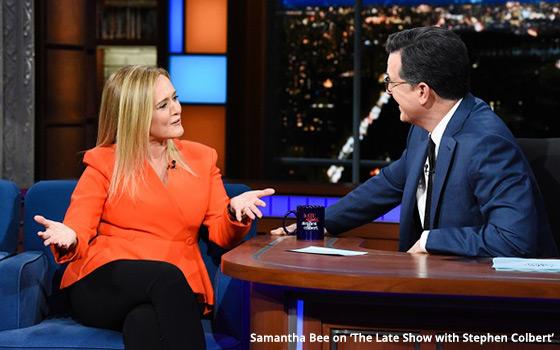 Donald Trump's head must explode at moments such as the one depicted in the photo above: Not one TV comedian who he detests, but two of them at the same time -- in this case Samantha Bee and Stephen Colbert on Colbert's “Late Show” last March.

This was long before Bee called Trump's daughter Ivanka a c--- on Bee's TBS show “Full Frontal” late last month. And Bee’s show is not technically a late-night show because it airs at the tail end of prime time, 10:30 Eastern (9:30 Central) on Wednesday night.

For his part, however, Trump is refusing to let the late-night shows get away with it. Monday night in South Carolina, our TV Critic in Chief let fly with a blunt “review” of two late-night shows and their hosts -- Colbert and ABC's Jimmy Kimmel.

The subject of late-night TV has been on his mind the last few days because of Jimmy Fallon, who “apologized” in an interview last week for being too playful with candidate Donald Trump when Trump appeared on “The Tonight Show” in September 2016 and Fallon mussed up his hair.

At this rally on Monday night, Trump started his commentary on late-night TV with Fallon. “He was so disappointed to find out [my hair] was real. He couldn't believe it. Well that's one of the great things I got. So Jimmy Fallon apologized. He apologized for humanizing me. Can you believe it? Poor guy, because now he's going to lose all of us,” Trump said, referring to his audience of supporters who likely feel the same way about the nation's late-night shows that he does.

“Jimmy Fallon calls me up and he's like a nice guy,” Trump said, saving much worse for Colbert and Kimmel. “[Fallon is] lost. He looks like a lost soul. But you know what, he's a nice guy. I agreed to do his show and I guess because I was running at that time, I think, he got tremendous ratings. He should be thankful. He shouldn’t be upset or angry. When you apologize, because you got somebody else that didn’t go on the other shows …  So I go on the show, you know, I agree. Do whatever you want with my hair. Go ahead, let’s go. And that was it! You walk off, what is it, two-and-a-half years later? He's all apologizing because he humanized me? And he really hurt himself.”

Trump then called Kimmel “terrible” and Colbert a “lowlife.”

“Jimmy Kimmel would meet me before the election,” Trump said. “I go to his studio to do a [guest] shot, he would stand outside on the sidewalk waiting for me. ‘Oh here he comes, Donald Trump.’ He opens my door. … I wasn't president. I was like a guy. A guy with potential. … Now I wouldn't do his show. That guy's terrible,” Trump said of Kimmel.

“The guy on CBS [Colbert], what a lowlife," Trump also said. “I mean honestly, are these people funny? And I can laugh at myself!” he insisted.

“Frankly if I could not, I'd be in big trouble. But there is no talent. They're not like talented people. Johnny Carson was talented. I mean this guy on CBS has no talent,” Trump said of Colbert.

With his Johnny Carson comparison, our president reveals that he's a legacy-TV kind of guy for whom the Carson show still represents the gold standard of late-night television.

Why call Colbert a lowlife? It might be because of Colbert's nightly attacks on him, but also because of one attack in particular in May 2017 in which Colbert issued a blistering monologue in which, among other things, he called Trump a “prick-tator.” Colbert also said this: “In fact, the only thing your mouth is good for is being Vladimir Putin's c--- holster!”

Colbert absorbed some criticism for the remarks at the time, but more than a year later, the incident has been largely forgotten -- but not necessarily by President Trump. Evidently, he intends to be a disrupter in yet another field -- the profession of TV criticism.