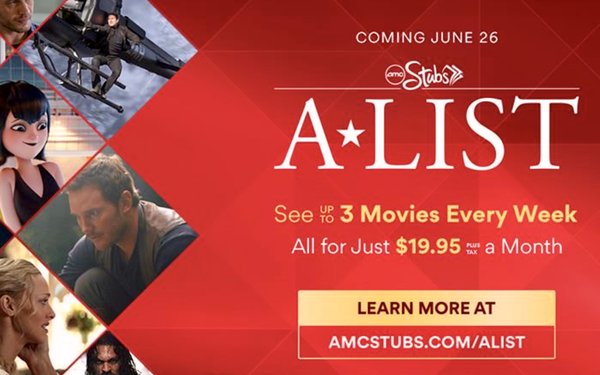 MoviePass, the struggling subscription service that burns through $22 million a month to stay afloat, alerted its three million members last week that soon it will be charging them more to see high-demand films at peak times.

The latest move from MoviePass comes days after AMC, the nation’s largest movie chain, announced that it will debut its Stubs A-List movie subscription plan, priced at $19.95 a month. That’s twice as much as MoviePass charges, but the details are in the asterisks.

That MoviePass disclosure came in an otherwise cheerful Facebook post in which the company wrote, “In the spirit of innovation and growth, we are now announcing the next phase in the evolution of our product: Demand Pricing.”

That means had demand pricing been in effect last Friday, a MoviePass subscriber who wanted to see, say, “Jurassic World: Fallen Kingdom” on its premiere night likely would have been told that’s not going to happen unless they pay some extra amount (reportedly $2).

Maybe they’d like to see the men-will-be-boys comedy “Tag” that night instead?

MoviePass limits a user to one movie a day and each unique movie can only be seen once, with no advance sale. A-List lets a subscriber see up to three movies a week — even the same movie and even ordered in advance — and is valid at specialty theaters like Imax or Dolby Cinema. MoviePass responded to that last feature by announcing it would soon offer its subscribers a way into Dolby and other such venues, also for an extra fee.

The A-List officially debuts on Tuesday. A third movie subscription plan, called Sinemia, also emerged last month, offering a range of price plans, some of which are even cheaper than MoviePass. The trick is that subscribers pay in advance for a year-long subscription.

All of them are trying to fulfill a need. While ticket prices average only $9 nationwide, in the biggest cities, admission is far more than that — on average, $14.30 in New York City. So the idea of a money-savings subscription plan makes sense, from a consumer’s standpoint. Some analysts see all the movie subscription plans as a way for theaters to make money even when moviegoers aren’t going.

For all of last year as MoviePass grew, AMC bad-mouthed it and said its price was unsustainable, and that moviegoers would resent the entire movie business when MovIePass inevitably folded and took subscribers’ money with it.

That seemed prescient. Shares of stock in the parent firm of MoviePass sold for almost $39 each last August. They’re trading at about 29 cents a share on Monday. Helios and Matheson Analytics said last week it is attempting to raise $164 million more  and said it could cost $1.2 billion more to keep MoviePass alive.