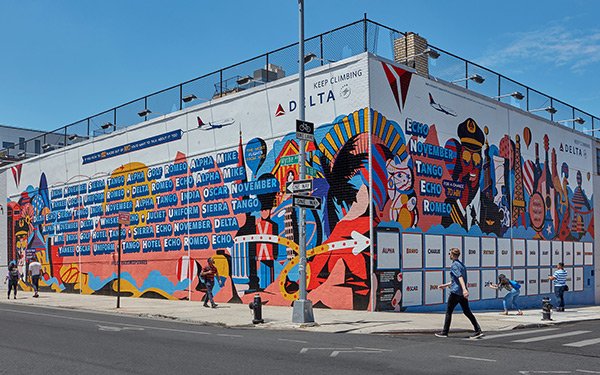 Wieden + Kennedy has teamed up with Australian designer Karan Singh for an out-of-home execution in New York that punctuates client Delta’s position as the airline that flies to more places out of New York City than any other competitor.

To help get the message out, Delta has taken over a giant wall in the Williamsburg section of Brooklyn and, with Singh’s help, adorned it with an eye-catching piece of street art that gives participating passersby a chance to win a trip to any of the 132 destinations Delta flies to from NYC.

Singh’s artwork illustrates each of the 26 letters in the phonetic alphabet, which is commonly used by pilots (alpha, bravo, charlie, etc.).

The related sweepstakes challenges passersby to spell their favorite destinations using the alphabet on the wall, posting the letters one-by-one to an Instagram carousel with #PilotTalkSweepstakes for a chance to win airline tickets.

Delta is also hosting an event June 30 at Kinfolk, a local Williamsburg eatery near the “Pilot Talk Wall.” Brunch-goers will be treated to custom Bravo-Echo-Echo-Rome mugs and coffee cups, Sigmund's Pretzels, and more while being encouraged to view the wall and enter the sweepstakes while waiting for a table.

The #PilotTalkSweepstakes will run for five weeks this summer, ending July 22. Delta will randomly select five winners, one each week during the contest period.