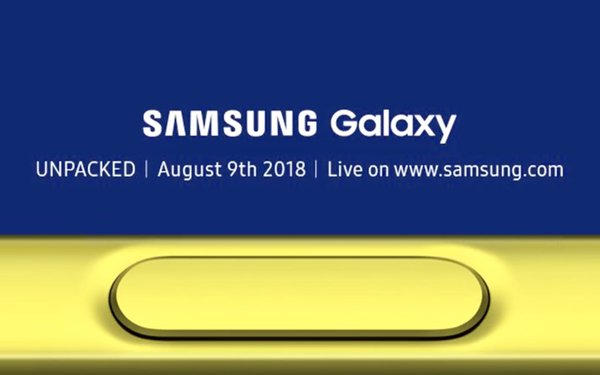 Techies, marketers and investors should care: Samsung has made it clear. It will unveil the new Galaxy Note 9 on Aug. 9, which will then become the day sales begin and rumors subside.

The early-August Samsung unwrapping means it would be due to hit retailers by the end of that month. That might at least blunt Apple’s event, and, in the business of smartphone marketing, that means something.

Samsung spilled the beans about the Aug. 9 date in an invitation to journalists. It happens at 11 a.m. at the Barclays Center in Brooklyn. It also released a video that gives tantalizing clues to just what this latest notebook will feature.

Early rumors suggest — pretty safely — that this Samsung Note will come in more vibrant colors. That’s the way an arty glimpse of the phone’s stylus looks in the invitation and video.

Apple and Samsung, of course, have been going mano a mano for years. In the last quarter of 2017, Apple sold 77.3 million iPhones while Samsung rung up sales of 74.1, according to data from IDC. But for the first three quarters, Samsung led.

Now it’s the fourth quarter for rumors. A detailed one came from the website PhoneArena, quoting “notorious tipster” Eldar Murtazin, who writes for a Russian publication. Murtazin characterizes the changes from Samsung Galaxy Note 8 to 9 as “very minimal” though it’s heavier because of a new battery that will let the Note 9 last two days without recharging. The other big change is that the new model will add Bluetooth capability to the Samsung S pen, which is no small deal.