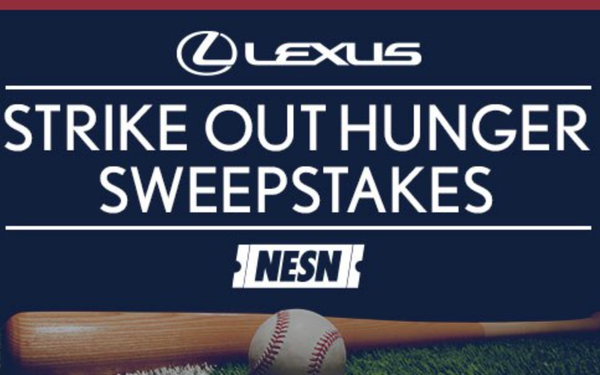 The Boston Red Sox are having a good season and thanks to Lexus, the Greater Boston Food Bank will benefit from those winning ways.

The team currently has the best win-loss record in the American League East — 59-29 — and a big part of those impressive stats is stellar pitching.

Lexus is working together with the New England Sports Network in an effort to combat hunger in the Boston area. The initiative launched on Opening Day and runs through all games in the 2018 Major League Baseball regular season.

Every time a Boston pitcher strikes out the opposing baseball team’s batter, Lexus will donate $50 to the Greater Boston Food Bank as part of the “Strike Out Hunger” program. Fans can also enter the "Lexus Strikes Out Hunger Sweepstakes" for a chance to win an NESN VIP Experience at the ballpark.

Due to the strikeouts they’ve secured this season, donations had already reached $41,450 as of July 5.

This is the third year in a row for the program. It follows two highly successful years, with Lexus donating a total of $147,100 to The Greater Boston Food Bank. The contribution provided more than 437,000 meals to those in need across Eastern Massachusetts.

The hope is that this year’s total will exceed each of the last two years, says Damon Rose, Lexus eastern area general manager.

"Children are one of every three residents served by the food bank, so it's more important than ever that we work together to end hunger in our own backyard,” Rose says in a release.

Lexus also hosted food drives for The Greater Boston Food Bank throughout May and June at six Boston-area dealers. Items donated to Ira Lexus of Manchester will benefit The New Hampshire Food Bank.