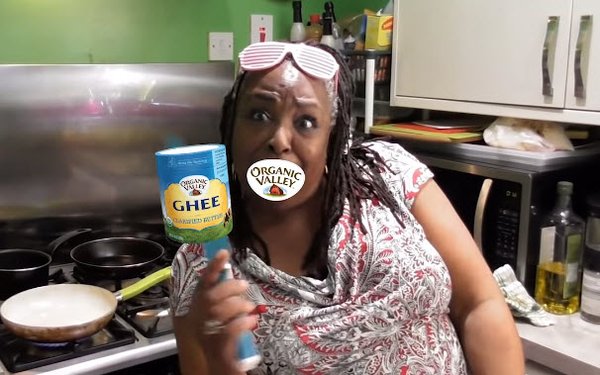 The clarified butter product, traditionally used in Indian food, is being embraced by foodies because of its rich flavor and performance in high-heat cooking. But at this stage, few recipes suggest using ghee in place of butter or oil, and most consumers aren’t sure how to use it.

The “Ghee-lish Any Dish” campaign, from the Humanaut agency, includes 17 video executions spanning 60-, 30-, 15- and 6-second versions.

The longer ads (60-second “hero” version below) start with an intro in which a spokeswoman briefly explains that ghee can be substituted any time you might otherwise use oil or butter. She then confides that “all the internet YouTubers are doing it,” as a segue into clips from some of the 10 participating influencers, who include Donal Skehan, Kent Rollins, Momma Cherri, Billy Parisi, Darius Williams and Alyssa Gagarin.

“Influencers are usually creating their own new content for brands. In this case, we’re leveraging the value of the influencers’ back-catalog and editing the footage ourselves. It’s a win-win for everyone,” said David Littlejohn, Humanaut’s founder and chief creative officer.

Each of the influencers has his/her own dedicated video. And starting during the week of July 9, the chefs will begin posting their videos on their own most avidly followed social platforms, encouraging their audiences to share the content.

The campaign is set to run through the end of the year on platforms including YouTube, Facebook and Instagram; food and home sites including Bon Appetit, Epicurious, Food Network, Serious Eats, HGTV and The Daily Meal. Programmatic site buys include People, Refinery29, Buzzfeed, The New York Times, Vanity Fair, The New Yorker, Time and Pop Sugar.