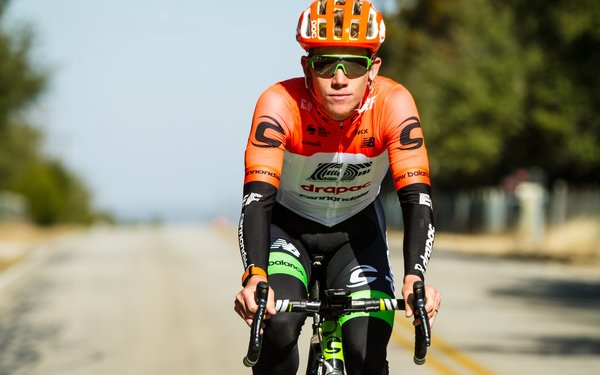 Even couch potatoes watching the Tour de France must wonder: How are these guys feeling?

This year, they can get an answer of sorts: American cyclist Lawson Craddock will be wearing a Whoop Strap 2.0 fitness device for the race starting Saturday.

The biometric data it tracks will be available in real time on the Whoop website to the site’s subscribers and at the end of the day to the rest of us.

Smartwatches have taken a chunk of the fitness tracker business in recent years, so a demonstration like Craddock’s should get some attention among hard-core athlete types.

There were 43 million Americans with an activity tracker in 2015, representing 83% of the wearable market, according to NPD. But as smartwatches got better, slimmer and slicker, the percentage shrunk to 62% last year. By 2019, NPD estimates that they will account for just slightly over half of the market.

In other words, a device that’s used by real, serious athletes should matter — and that’s the crowd that Whoop is after. “You can’t call an Uber with it,” founder and CEO Will Ahmed has quipped, drawing a distinction between Whoop and the newer, multi-tasking smart wrist devices.

The Whoop band has five sensors that analyze recovery, strain and sleep, and takes measurements 100 times a second, according to the makers. The sensors check heart rate and variability, ambient temperature and skin connectivity — key variables in an athlete’s performance.

Athletes get a good sense of how their body is responding to activities, and can plan accordingly. They can also see how much quality sleep they got (and judging by other data, how much they need).

The Whoop bracelet was worn by more than 200 minor league baseball players in 2016 and approved for use by Major League Baseball for the following season. It also has a deal with the NFL Players Association.

The strap has been on the market since 2015, but it went to a subscription model for the first time in May. For $180, you get the strap and the first six months of data.

“Whoop believes that understanding your body allows you to perform at your highest level,” says Ahmetd. “We’ve worked with top athletes and teams around the world to help them do so.”

Craddock, one of five Americans competing in the grueling Tour de France, offered an effusive testimonial: “I’ve been able to track vital data such as HRV [heart rate variability] and sleep to train smarter and more efficiently. This has helped me climb out of a serious hole of overtraining, and allowed me to get back to being competitive at the top level of cycling.”