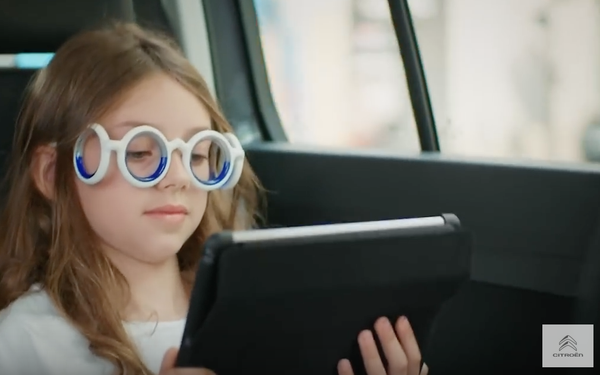 A French car manufacturer and its agency are taking the comfort of its customers one step further.

Motion sickness is a common condition that chronically affects more than 30 million people in Europe and likely millions in the U.S. One in three people develops symptoms at least once in a lifetime, according to the automaker.

The condition is due to a difference in perception between the sight and the sense of balance. The glasses use “boarding ring” technology, a patented and tested paramedical device with a 95% efficiency rate, developed by a French start-up.

Colored liquid moves in rings arranged around the eyes, in the frontal direction (right-left), but also in the sagittal direction (front-back). This recreates an artificial horizon which re-synchronizes the sight and the inner-ear and solves the motion sickness in less than 10 minutes and in 95% of the cases.

The glasses will initially be sold in limited and exclusive quantities in the brand's lifestyle boutique. The automaker has created a video to describe how the glasses work.