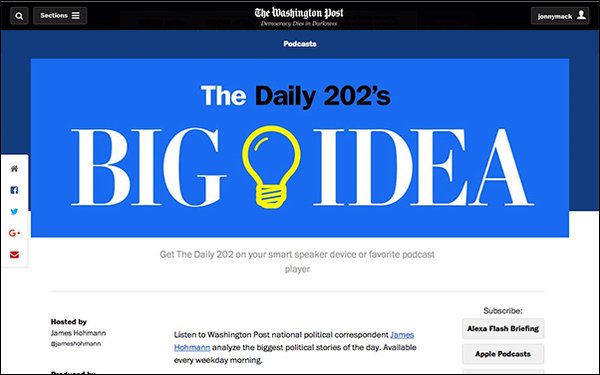 In an effort to further podcasts as an advertising revenue source well after their debut date, The Washington Post’s Research, Experimentation and Development (RED) introduced a new piece of podcast ad tech called Rhapsocord.

The company will first test out the new tool on its podcast “The Daily 202’s Big Idea” before expanding it.

Podcasts have become big business for traditional news outlets. However, one of the issues facing the platform is the quickly stalling advertising found within it.

Garrubbo spoke about the specificity of podcasting audiences. They expect something different from website readers because the medium demands seamlessness between a podcast’s content and, in NMP’s case, the sponsors that surround it.

The ramifications of running the wrong type of advertising are clear: Run a jarring ad and risk losing a loyal audience member’s attention and dollars.

Rhapsocord, an ad insertion tool built to run across The Washington Post’s CMS, dynamically identifies where ads can be placed within a podcast — pre-roll, midroll and post-roll spots.

The tool also provides advertisers with saved metadata from episodes of a podcast, so they can buy spots based on topics like politics, finance or history.

The technology also allows older podcasts to be refreshed without producers having to re-edit the podcasts with new advertisements by inserting new ads into episodes automatically.

According to Ad Exchanger, Aram Zucker-Scharff, ad engineering director for RED, suggests the new tool will allow for new podcast inventory to become available, while still allowing advertisers to buy through salespeople. He highlighted the tool’s ability to create a “self-serve podcast ads platform or programmatic audio.”

He stated: “Because we built an automated system, anyone who complies with the ads API standard could serve ads into the system, whether it’s a self-serve platform or an integration with a programmatic platform.”

Zucker-Scharff also noted that the new tool allows a podcast to be updated across the entirety of platforms where listeners might access it.

Podcast advertising was slow to pick up at first, but has exploded over the past few years. IAB and PwC released their second annual Podcast Revenue Study in June of this year. According to the study, host-read ads were the preferred ad type and represented more than two-thirds of ads in 2017.

Ads that were integrated or edited into the programming accounted for 58% of podcast ad inventory. Direct-response ads accounted for the majority of campaigns, followed by brand awareness ads.

Overall reported revenue by the companies surveyed increased by 275% from 2015.

How the introduction of programmatic audio will sit with podcast audiences  used to their advertising being delivered in a more curated, thoughtful fashion will be interesting to watch.

According to the study, only .7% of advertising revenue was programmatic in 2017.