'GMA' Bikini Parade Showed Other Side Of Swimsuit Pageant Debate 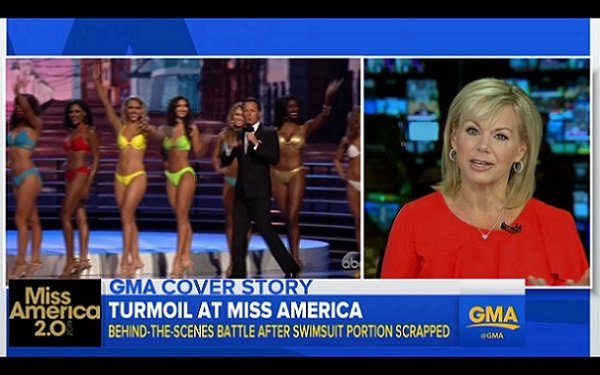 A discussion on "Good Morning America" this week that was all about the "Miss America Pageant" decision to do away with its famous swimsuit competition was generously adorned with past contestants proudly strutting the pageant stage in skimpy bikinis.

The juxtaposition was hilarious and also revealing (no pun intended) about where TV’s values really lie.

Even while they purported to put on a serious discussion about why the swimsuits should be done away with, “GMA’s” producers still seemed to feel that one of the best ways to keep people tuned into the segment would be to provide a steady stream of bikini-clad beauties on screen at all times.

The headlining personality in this segment was Gretchen Carlson -- former beauty queen (Miss America 1989), former Fox News anchorwoman (and the sex-harassment whistleblower who brought down Roger Ailes), and now, chairwoman of the Miss America Organization.

She made news last month when she announced, on behalf of the organization, that the Miss America board of trustees had voted in favor of eliminating the swimsuit competition from future pageants, starting this September.

Contestants “will no longer be judged on outward physical appearance,” said a press release from the pageant (which, by the way, is no longer a “pageant,” the organization added).

Cut to this past week and the news has been circulating that roughly half of the nation's top pageant organizers -- the executive directors of 22 state pageants that send their winners to the Miss America Pageant every year -- are unhappy with the no-swimsuit ruling and are now petitioning for Carlson to resign.

So Carlson turned up this past Tuesday on “GMA” -- on ABC, of course, the network of the pageant -- to defend the Miss America Organization's new direction where the judging of contestants’ physical appearances is concerned.

“We are so thrilled with the people that we have heard from [in support of this new direction] -- so many moms and dads, grammas and grampas [her pronunciation] and young women who are now telling us thank you for making it more inclusive because we too want to show our leadership skills and earn scholarship dollars to go to college,” Carlson said at one point (without ever producing any examples of this voluminous correspondence).

However, as she said this and other statements like it, the physical appearance of many of the contestants from a recent pageant were on full display while Carlson discussed the situation with “GMA’s” Robin Roberts.

Now that the Miss America Organization is getting some pushback from state pageant organizers, the future of this swimsuit competition ban might now be in doubt.

Sure, it might remain in place for this year's pageant (scheduled for September 9), but it is entirely possible to conceive of it returning as early as the following year.

For one thing, if “physical appearance” remains as one aspect of the judging in pageants at the state level -- at least in 22 states -- then it stands to reason that the winning contestants from these states who will then compete in the Miss America Pageant will have won, at least in part, because of their physical appearance.

That should make for an interesting competition at the national level between those who were awarded for their physical appearance and those who were not.

In the end, old-fashioned TV values will be the real determinant of whether or not the swimsuit competition will continue to be banned or eventually reinstated. That's because, at its heart, TV is a crass medium -- as the “GMA” bikini juxtaposition clearly demonstrated.

tv, women
1 comment about "'GMA' Bikini Parade Showed Other Side Of Swimsuit Pageant Debate".
Check to receive email when comments are posted.
Next story loading