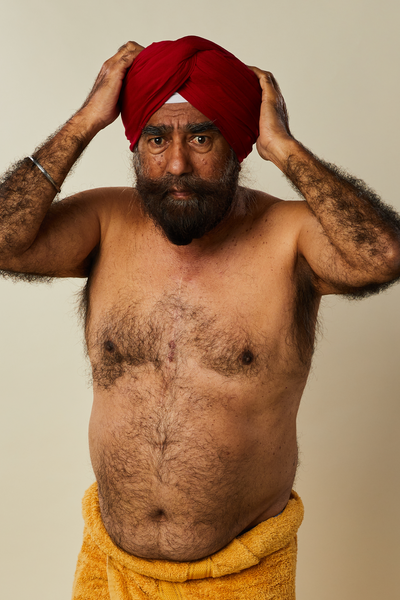 Few commercials have ever been as beloved, or successful, as the 2012 introductory spot for Dollar Shave Club (DSC) featuring founder Michael Dubin who, in a mock serious tone, explained why his brand new, start-up razor blade sold online was, well, just about the best a dude could get.  At least for the price.

Flash forward several years. DSC is now a suite of men’s grooming products from butt wipes to  shampoo to toothpaste and was bought by Unilever for $1 billion in 2016. (Dubin is still CEO.)

And DSC commercials still stand out, including its attack on the locked display case fortresses in drug stores that separate razors from customers.

Now there’s a new one, in the form of a 3:39 video. It is not quite as self-effacing but just as sharp. The new campaign will feature 30-second cutdowns that, probably, will trim around the raunchier glimpses.

“Get Ready” shows, in quick cuts, dozens of men primping in the bathroom but what’s edgy here is the wide embrace of guy types: There are fat, thin, white, black, Asian, Hispanic men, gay, straight, trans, transvestite, young and old, flabby and buff.

They are hairless and hairy where you’d expect and hairy in places where commercials usually don’t go. The commercial is funny, sweet, sincere, and over the top, intimate and gross. (Dubin, who worked on improvisation with Upright Citizens Brigade when he was younger, is shown in his bathroom video wadding a thick piece of toilet paper into his underwear, and then posing with proud macho prowess).

Through it all is a recording of Steve Lawrence singing “I’ve Got To Be Me.”

The idea is DSC’s approving nod to diversity and inclusion. “The cast of characters are a mosaic of America,” Matt Knapp, the executive creative director  and vice president of creative, tells Marketing Daily.

Moreover, says Dubin, “It celebrates the authenticity of ‘getting ready.’ We all do it, every day, in our own way. It is a very tender moment” that, he says, carries with it the big hopes for whatever it is that the day or night ahead holds.

From a business perspective, Dollar Shave Club also wants to call attention to everything it sells. “It’s a pivotal time for our brand and services,” Dubin tells Marketing Daily, and given the growth of online merchandising and young men growing beards, there’s a new digital generation that may have not yet discovered DSC can give them “everything they want a few times a year.”

All those guys are in the commercial somewhere.