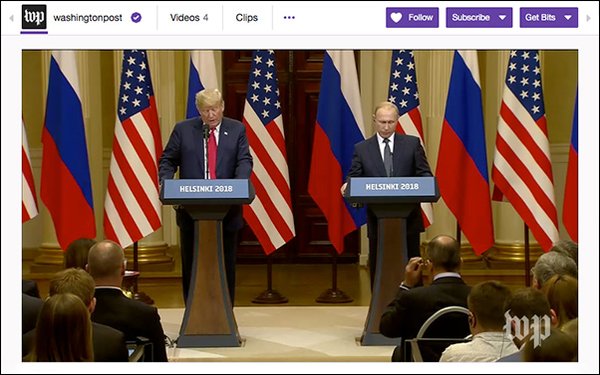 Earlier this year, the platform announced a partnership with Disney Digital Network that would allow the network to share content from some of its top creators across the platform. Then in April, Amazon announced a multiyear deal with the NFL that would continue live streams of "Thursday Night Football" to Amazon Prime members.

The Washington Post is hoping to use the platform to deliver news-related content to a new host of viewers with the launch of its own dedicated Twitch TV Channel.

According to WaPo, the channel is intended to create “a space for civil discourse on issues of the day and a fun entry into news.” The programming will include live event coverage and a series called “Playing Games with Politicians.”

WaPo political reporter Dave Weigel will host the series, featuring interviewers with prominent politicians as they play a video game. The show will run as a 30-to-60 minute live stream that tackles what’s happening in the nation’s capitol and current headlines. The two will also take viewer questions.

Sen. Cory Booker (D-NJ) and Representatives Suzan DelBene (D-Washington) and Matt Gaetz (R-Florida) are all slated to appear on the first season.

Yesterday, the channel featured political reporter Libby Casey, who hosted a live stream during the bilateral summit between Trump and Putin. She was joined by White House reporter David Nakamura and audience editor Gene Park as the three unpacked the context of the meeting and the day’s other news.

WaPo first used Twitch during Mark Zuckerberg’s testimony on Capitol Hill earlier this year. The audience engagement from that experiment led to the decision to create a dedicated Twitch channel.

Much like publishers using platforms like Snapchat to reach current and new readers and viewers, WaPo’s use of Twitch speaks to a larger trend: Brand trumps platform. While the traditional avenues for publication — web, print and mobile — come first, a publication’s worth across new platforms is only as good as its reputation.

Though Donald Trump may believe journalists are the “enemy of the people,” those same journalists are finding new and innovative ways to reach even wider audiences, delivering essential information and maintaining their constitutional mandate, speaking truth to power.