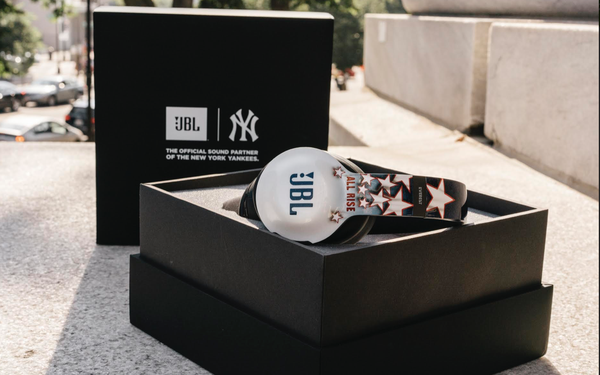 The 2017 American League Rookie of the Year is following in the footsteps of other Yankees greats who were brand ambassadors including Mariano Rivera. Judge kicked off his new role Monday as he inherited a pair of customized headphones designed by JBL.

Fans will find Judge and JBL all over New York City this summer. Whether hailing a taxi, riding the subway or catching a game at Yankee Stadium, New Yorkers and visitors to the city can expect never-before-seen content and displays featuring the All-Star slugger.

The baseball player says he relies on the headphones while training in the weight room and feels like it’s “game on” when his walkup music is blasted through JBL speakers at Yankee Stadium. (He is known to use "Big Shot" by Kendrick Lamar featuring Travis Scott.)

“The energy that he brings to everything that he does, both on and off the field, reflects the vibrancy of the brand,” Santana says in a release. “There’s a rich history between JBL and the Yankees, and we’re thrilled to be partnering with another rising star on some exciting projects to be announced in the coming months.”