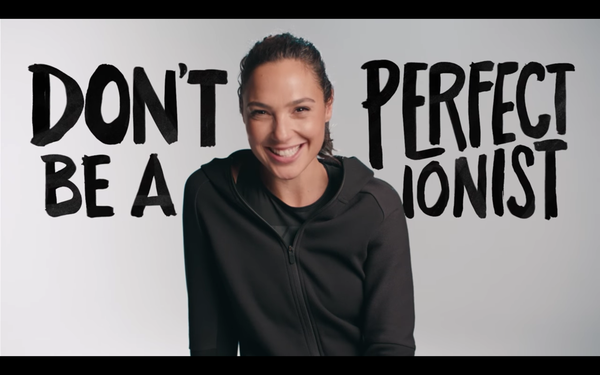 What woman doesn’t need an occasional workout pep talk? Reebok is launching what it calls its most significant women’s campaign ever, asking celebrities like Gal Gadot, Ariana Grande and Gigi Hadid to share their words of encouragement.

The ads, which stand out from other femvertising spots by using graphics to highlight the upbeat messages, are the latest in Reebok’s #BeMoreHuman positioning, launched back in 2015. And the Adidas-owned brand is linking the new ads to women’s causes, including the Movemeant Foundation and The Women’s Strength Coalition. Its selling 10 special-edition t-shirts, with 100% of the proceeds going to partner nonprofits.

Reebok says the idea behind the ads is to celebrate “women who are helping bring positive change to the world,” while continuing the underlying message of the campaign, encouraging people to find the best possible version of themselves — physically, mentally and socially.

In a fun social twist, Reebok is also asking people to “Donate in Sweat,” giving $5 for every workout picture posted on Twitter or Instagram with the #BeMoreHuman hashtag (up to 2,500 posts), or for attending such events as its Sweatcon rallies, held at FitHubs in cities like Boston, New York and San Diego.

Venables Bell & Partners is the agency.

Reebok, which has been leveraging its fashion heritage with the Reebok Classics line and performance sales as the exclusive global outfitter of both CrossFit and the UFC, has been a weak spot in Adidas’ portfolio. In its most recent financial results, Adidas reported that sales climbed 11% at its Adidas brand, with sales especially strong in North America and China. But revenues fell 3% at Reebok, due to declines in the running category, and ongoing softness in training gear.