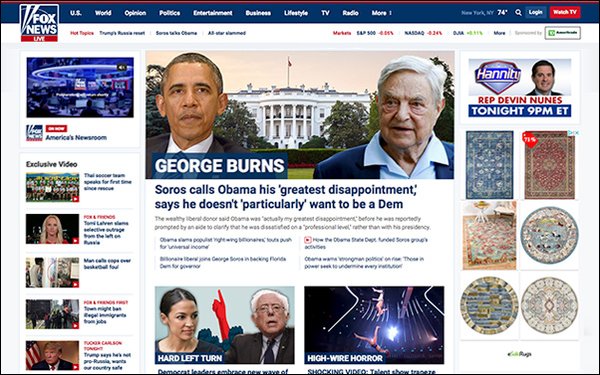 From April through June, FoxNews.com had more total page views than CNN.com.

However, according to June 2018 comScore data cited by Fox News, its website had 167 million views more than CNN.com, and 1.4 billion multiplatform views, FoxNews.com is up 19% year-over-year in multiplatform total page views.

That’s 409 million more page views than The New York Times' site and 834 million more than the The Washington Post.

In terms of unique visitors, CNN.com is ahead of Fox News, though the latter notes unique users were up 15% in June, compared to the same month in 2017.

The Fox claim did elicit a strong CNN response.

Matt Dornic, vice president of communications and digital partnerships, said Fox News is cherry-picking the numbers on comScore — that it is comparing its total pageview numbers to a portion of CNN’s traffic that does not include other verticals, like its media and business coverage.

“Fox News is trying to do what they do best: deceive audiences,” he told Publishers Daily. “Yet again, they are comparing apples to bananas: a subset of CNN’s digital traffic to theirs in total by deviating from comScore’s brand-to-brand definitions. Furthermore, popping bottles over pageviews is really 2010. Sad.”

In response, a Fox News spokesperson says the data it used from comScore compares their pageview numbers "apples to apples."

According to analysis of SimilarWeb data by TheRighting, a media company that aggregates articles and content from conservative media outlets, FoxNews.com is part of the 75% of the top 20 conservative websites (measured by visits) that had audience growth in June.

Howard Polskin, president and chief curator at TheRighting, believes conservative audiences may have been drawn to those outlets for news and commentary regarding Trump's immigration policies.

“Those stories dominated conservative media for a good part of the month," he stated.

One caveat: A Fox News media rep claims its news operations are separate from its opinion-commentary shows. Even if Fox News' audience leans to the right, she says Fox does not categorize the news channel as a conservative news outlet.

Update: comScore “violated its policy” by commenting on how its partners use its page view data, in the original correction to the Publishers Daily story (above) a comScore spokesperson reached out to correct the record: “We can only verify the accuracy of the data itself.”

Comparing FoxNews.com page view data to both CNN.com and CNN Brand numbers is accurate, the rep added. “We erred in inferring that it is ‘more accurate’ to compare FoxNews.com to the CNN Brand. This statement was incorrect as both comparisons are valid.”

comScore is taking steps to “improve our procedures moving forward.”