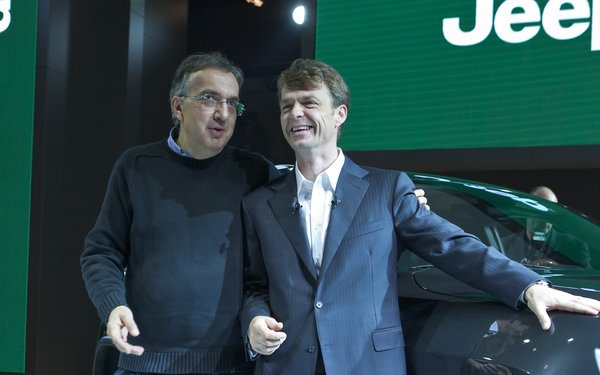 Sergio Marchionne and Mike Manley, who was then-president and CEO of Jeep Brand, at the 2010 Paris Motor Show.

Marchionne’s last public appearance was June 26, when he spoke at an event in Rome, according to Bloomberg. The company said on July 5 that the CEO underwent an operation on his right shoulder and was expected to require “a short period of convalescence.”

The 66-year-old had already announced he was planning to leave by early next year. FCA issued an emotional statement Saturday: “With reference to the health of Sergio Marchionne, Fiat Chrysler Automobiles communicates with profound sorrow that during the course of this week unexpected complications arose while Mr. Marchionne was recovering from surgery and that these have worsened significantly in recent hours. As a consequence, Mr. Marchionne will be unable to return to work.”

FCA’s Board of Directors met Saturday and opted to accelerate the CEO transition process that has been proceeding over the past months and named Mike Manley, 55, to the position. FCA Chairman John Elkann said in an emotional and eloquent statement that he was “profoundly saddened to learn of Sergio’s state of health. It is a situation that was unthinkable until a few hours ago, and one that leaves us all with a real sense of injustice.”

Elkann said that even more than Marchionne’s management skills and “unusual intelligence, were his human qualities, his generosity and the way he understood people. Over the past 14 years together we have lived through successes and difficulties, internal and external crises, but also unique and unrepeatable moments, both personal and professional. For so many, Sergio has been an enlightened leader and a matchless point of reference.”

Manley, 54, a native of Edenbridge, England, was appointed head of the Ram brand in 2015. He has also been head of Jeep brand since 2009. He was previously chief operating officer of Asia, and ran international sales and global product planning for the company. He will proceed with the implementation of the 2018–22 business plan presented on June 1 of this year, “a plan that will further assure FCA’s strong and independent future,” according to the company.

The automotive industry is reacting with shock to the news.

"Sergio's departure comes as incredibly sad news for the entire industry,” said Jeremy Acevedo, manager of industry analysis, Edmunds, in an email. “Never one to shy away from a challenge, Marchionne’s bold, confident leadership style set the bar for what’s needed to be successful in today’s transformative times.”

Acevedo and others agree that Manley is the logical choice.

“There’s no question that he's leaving behind big shoes to fill, but Manley makes perfect sense to carry the torch of his legacy,” Acevedo says. “Given his profound success in elevating the company's Jeep and Ram brands, he's already been responsible for driving the bulk of profit for FCA.”

Manley’s global experience and international experience in growing the Jeep brand will play a key role as he applies those techniques to all of the Fiat Chrysler divisions, says Karl Brauer, executive publisher of Autotrader and Kelley Blue Book.

“It’s an end of an era with the iconic, highly quotable, sweater-wearing Sergio Marchionne stepping down, with significant very concerns about his ailing health,” Lindland says. “Mike Manley is a worthy replacement at FCA, but it’s a huge job to not only fill Sergio’s shoes, but to run many brands that are facing capricious fortunes in a variety of markets. But Manley’s masterful management of Jeep and Ram will serve him well as he moves into this huge, global role.”