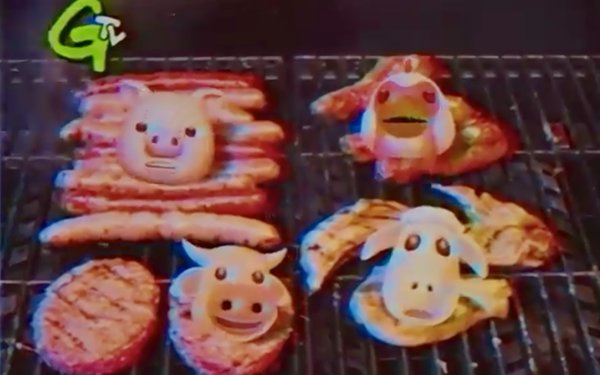 Greenpeace France is out with new campaign aimed at discouraging people from barbecuing meat on their outdoor grills this summer. The centerpiece of the campaign is a three-minute music video recalling the aesthetics of ’90s rap sung by animated emojis.

Developed with agency 84.Paris, the amusing creative, “You Don’t Need All That Meat," introduces the “Gangsta Grill” team consisting of a pig (Notorious P.I.G.), chicken, sheep, and cow, whose messages seek to encourage viewers to reconsider what they put on the grill.

Notably performed in English (with French subtitles), the concept emulates the stylings of Notorious B.I.G., B-real of Cypress Hill and Snoop Dogg rather than today's more hardcore rap style.

This project's throwback design was intentionally developed for messaging rather than musical preference, says 84.Paris's founder, Hervé Bienaimé. To create a song that pays homage to the ’90s underscores the fact that nothing much has changed, he says. "The environmental situation has deteriorated over the 25 years, to an almost unimaginable degree."

He adds that the entire concept evolved dramatically from the original pitch, which was meant to be a holiday, not summer, video focused on eating too much meat around Christmas. But for timing reasons, the campaign got pushed back, he says. "In the end, we said to ourselves, well, summer and BBQ season is a great opportunity to launch the idea and tackle the subject in an entertaining way."

The video runs across Greenpeace’s social networks with a :15-second teaser appearing via YouTube pre-roll as well as select Greenpeace partners. The premise has proven so popular in France that Greenpeace US is also going to use it, albeit removing the French subtitles. Other Greenpeace offices are "more than welcome to use it" says Bienaimé.