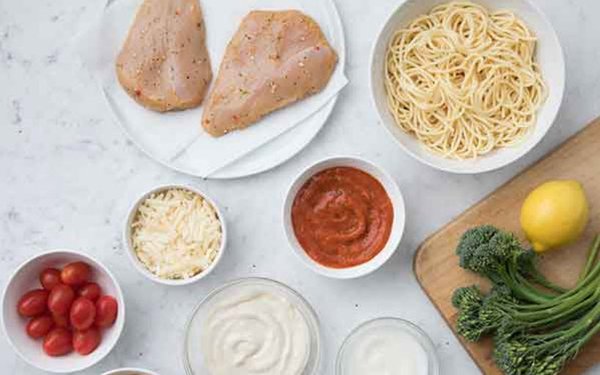 Chick-fil-A is taking on HelloFresh, Blue Apron and a growing number of big food retailers by becoming the first quick-serve restaurant to offer branded meal kits.

The QSR will begin testing its Mealtime kits in 150 locations in the Atlanta metro area starting August 27.

The kits, to be sold in-store, at drive-throughs and via the Chick-fil-A app, will be offered in five, ready-in-30-minutes chicken recipes: parmesan, Dijon, pan-roasted, enchiladas and flatbread. During the test period, through mid-November, the recipes will be offered on a rotating basis.

Priced at $15.89, each two-serving kit comes with instruction cards, as well as premeasured ingredients that include raw, marinated pieces of the chain’s antibiotics-free chicken. The kits are packaged in compostable, 100%-recyclable boxes, according to the company. They bear use-by dates, and can be refrigerated for a week.

“We designed our offering so our guests don’t have to order ahead, subscribe to a service, or make an extra stop at the grocery store,” stated Michael Patrick, an innovation program lead who is heading up the meal-kits venture for Chick-fil-A . “They simply pick up a Mealtime kit at one of our restaurants at their convenience.”

Chick-fil-A, which has set up a web page for the kits, will use sales and customer feedback (including social media) from this test and subsequent ones in other regions to determine whether to roll out the kits to its 2,300-plus locations across the country. Atlanta residents can use a form on the kits’ webpage to request that their local Chick-fil-A is among those offering the kits during the test, and consumers elsewhere in the U.S. can use it to ask that their area be among the next test regions.

Speaking to the Atlanta Journal-Constitution, Patrick characterized the meal kits as one of the most innovative product launches in Chick-fil-A’s history.

The still-young meal-kit business is growing rapidly. Piper Jaffray puts the U.S. market at $2 billion, and Earnest Research reported that U.S. sales rose nearly 41% last year. That has, of course, spawned intensified competition, with at least 150 companies in the space, according to Piper Jaffray.

In addition to HelloFresh (now #1, with a reported 1.2 million U.S. customers and $353.5 million in revenue as of Q1) and #2 Blue Apron, #3 Home Chef is poised for accelerated growth after its acquisition by Kroger — the nation’s largest supermarket chain —in May. The Albertsons supermarket chain acquired Plated in 2017.

Moreover, meal-kit pioneer brands are up against kit purveyors that now include giants Target, Walmart and Amazon —which is leveraging its Whole Foods division for distribution of the products. As a result, the initially online-only pioneers have been cutting deals with bricks-and-mortar retailers. Blue Apron is selling its kits through 15 Costco stores, and HelloFresh last month announced that it will sell its kits in Giant Food and Stop & Shop supermarkets.

The shakeout that always comes with heightened competition has also begun. Just last week, the national meal-kit company Chef’d abruptly ceased operations after what CEO Kyle Ransford described as “some unexpected circumstances with the funding for the business.”

If Chick-fil-A’s venture proves a hit, other restaurant brands —possibly well-known casual and fast-casual brands, as well as QSRs, with distinctive menu offerings — will undoubtedly dip their claws and/or hooves into the kit waters, as well.

Only time will tell how many and which types of players will emerge from the fray over time. But for restaurants in particular, the prospect of having a home-based food consumption channel to help offset inevitable, economy-driven dips in consumers’ out-of-home food spending is bound to be an attractive one.