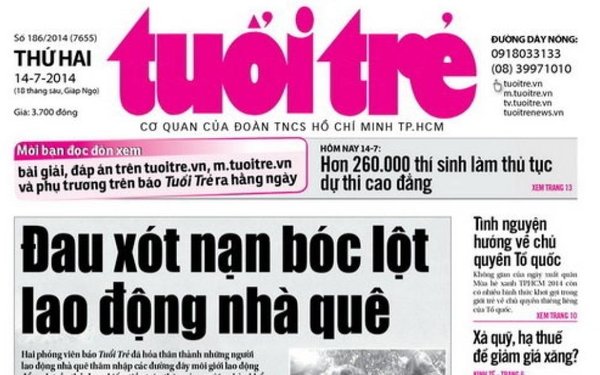 A funny thing happened when the Vietnamese government shut down the online version of popular daily newspaper Tuoi Tre: citizens in the highly digital nation began buying the print edition, primarily out of support for free expression.

Tuoi Tre, which translates in English to “youth,” is known for its hard-hitting journalism, and the government last week suspended its ability to serve its online version for three-months, citing -- yes, you guessed it -- “fake news.”

The paper, which is run by the Ho Chi Minh Communist Youth Union, was also asked to “correct the false information” and fined $9,500, according to another domestic news outlet Viet Nam News.

The government’s censorship follows Vietnam’s June passage of a cyber security law governing internet use and earlier arrests of bloggers whose writings question the government.

The law gives the government the power to control prohibited content, especially anti-government reports, and the suspension of Tuoi Tre appears to be its highest-profile use of it to date.

The smoking gun for pulling the digital plug on Tuoi Tre was an article it published last month that Vietnamese President Trn i Quang recommended a law allowing public protests, which Vietnam’s Ministry of Information and Communication called false.