Guess Heads To The Desert For New Campaign 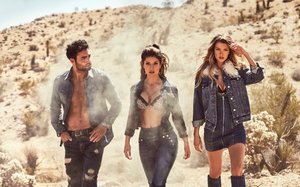 Guess is packing up its denim bags and heading into the California desert this fall, with a new print campaign shot in Joshua Tree. Besides its trademark jeans, ads follow models on a dusty road trip as they show off everything the brand’s full line for the season — faux fur, leather and snakeskin; floral jumpsuits, micro minis, modern camouflage and cats-eye sunglasses.

Ads are running in fashion and lifestyle magazines, as well as online, in social channels, instore and in outdoor ads.

The new effort is the first from the company since the resignation last month of Paul Marciano, the company’s co-founder and executive chairman, following an investigation into sexual harassment allegations.

The new campaign’s decidedly California mood is a nod to the Los Angeles-based company’s roots. It soared to1980s superstardom with its trademark zip-leg jeans and model Claudia Schiffer, and has been on a comeback tear of late, recently announcing its seventh consecutive quarter of revenue growth. With more than 1,000 retail stores around the world, it also says its North American stores achieved positive results for the most recent quarter, even as it reduced its promotional activity.

The Marciano resignation has cast an ugly cloud on a company that has staked its positioning on the backs of some of fashion’s most famous models. It started early this year when supermodel Kate Upton, lately of Sports Illustrated fame, raised a red flag with a tweet: “It’s disappointing that such an iconic women’s brand @GUESS is still empowering Paul Marciano as their creative director #metoo.” She then added to her comments on Instagram: “He shouldn’t be allowed to use his power in the industry to sexually and emotionally harass women #metoo.”

The company quickly announced an investigation, which it says involved interviewing more than 40 people and reviewing 1.5 million pages of documents. While the company says it did not corroborate any charges, it concedes that “on certain occasions, Paul Marciano exercised poor judgment in his communications with models and photographers.”

Settlements related to the charges resulted in $500,000 to five individuals.

Guess is hardly the only fashion brand to be rocked by #MeToo charges: Earlier this year, multiple serious sexual misconduct allegations were made against Bruce Weber, best known for decades of photography for Calvin Klein, and Mario Testino, who was subsequently dropped by Conde Nast, Burberry, Michael Kors and Stuart Weitzman.