Spotlight On Amazon Prime Day: Driving Purchases From Over Half Of Prime Members

On July 16, Amazon’s record-breaking Prime Day was the biggest global shopping event in the company’s history, with consumers purchasing more than 100 million products. Research shows, among other findings, that Prime Day was particularly a hit with adult males, many of whom purchased high-ticket items.

In a survey of U.S. adults, 56% reported living in a household with at least one Amazon Prime account holder. Adults in age cohorts 18-24 and 25-34 were most likely to reside in a household with an account holder, at 71% and 70%, respectively. As age increased, the number of respondents with household access to a Prime account steadily decreased. Of all Prime members, survey findings show that more than half (51%) purchased a Prime Day deal.

Overall, males were 9% more likely to participate in Prime Day than women. The largest number of respondents to purchase deals were between the ages of 35 and 44, at 58%. Millennial cohorts followed, with 56% of adults ages 25-34 and 52% ages 18-24 reporting purchase of a Prime Day deal. The Northeast had the highest participation, with 58% of respondents reporting the purchase of a deal. Despite this surge in participation, the same percentage of respondents in the West, South, and Northeast said they lived in a household with a Prime account.

Results indicate that respondents were likely to purchase big-ticket items during Prime Day. While 52% of respondents only purchased one to two items, survey findings show that 39% spent $100 or more. Overall, males spent more than females, with 45% reporting spend of $100 or more, compared to 33% of females indicating as such.

Clothing was the most popular type of product purchased, with 36% of respondents purchasing garments during Prime Day. Beauty, Home, and Toys/Games departments followed, with 21-27% of shoppers purchasing products in each of these departments.

According to the survey findings, 39% of those who reported visiting Amazon.com on Prime Day experienced glitches while shopping. Among those who experienced issues, 48% indicated either a slightly or much more negative perception of Amazon as a result. 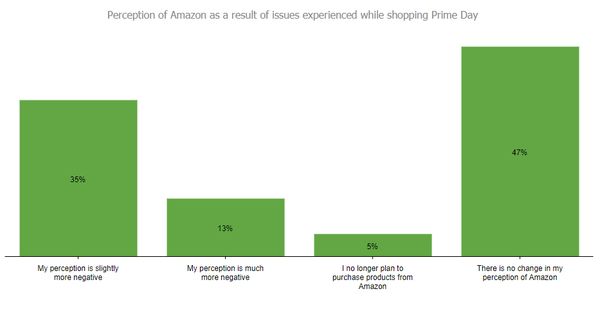 Male shoppers who experienced technical issues were 11% more likely than females to express any type of negative perception, including ceasing use of Amazon.

Here is a visual look at the stats.