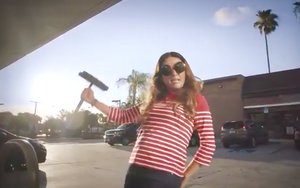 Some women on the go would really like some time to themselves, says a new batch of research being touted by ExxonMobil. It tries to convince women — moms, specifically — that  using Exxon and Mobil’s Synergy Gasoline, with seven “key ingredients” will protect engines and improve gas mileage.

And that could add up to less time at the pump, which would give them more time to spend, potentially doing something they really want to do.

Comedian JenniPulos (seen above) makes the pitch in three new spots breaking today, but at least two other spots in the last couple years seemingly aimed at women have centered on those seven ingredients.

Exxon Mobil’s pitch for the new campaign includes statistics from a survey that purports to show how desperately would like more time, just for ... whatever.

In one of the commercials, a harried mom tells Pulos, “I’d love to have five minutes on the toilet, by myself.”

Images of the soccer mom, carting around the kids from place to place in the SUV and doing grocery shopping are burned into the American psyche, or at least that part of it that works on Madison Avenue. But according to the U.S. Energy Information Agency, men drive an average of 16,550 miles a year. Women drive 10,142.

A spokeswoman for Weber Shandwick, which produced the ads, says that the point of the ads is to show that women“are masters of meticulously engineering their day — often all from behind the wheel while they shuttle from work, to pick up the kids, to soccer practice, PTA meetings and beyond. It’s a lot. So it’s important to fuel up with gasoline that supports your mileage.”

Almost from the time the first service stations opened, big oil doted on women, writes Katherine J. Parkin in her book, Women at the Wheel: A Century of Buying, Driving and Fixing Cars, which even credits the need to cater to women for prompting gas stations to compete to claim the cleanest restrooms, as far back as 1938.

In the new spots, Pulos, whose credits include a kids rap album and producing credits for reality shows,  performs a gas station rap (“Mom’s got more plans than minivans/And no time in the day/When I pull up to the pump/And my kids all actin’ cra’ “) and “ambushes” customers at a gas station to ask them how they’d spend a few stolen moments, if they had them.

In the third spot, Pulos performs a “momologue” as she drives with her baby in the back seat. “Better gas mileage means I can practice the ancient Exxon and Mobil sleep method,” she says as her daughter snoozes behind her. That’s the one most moms, especially who themselves are running on empty,  know very well.