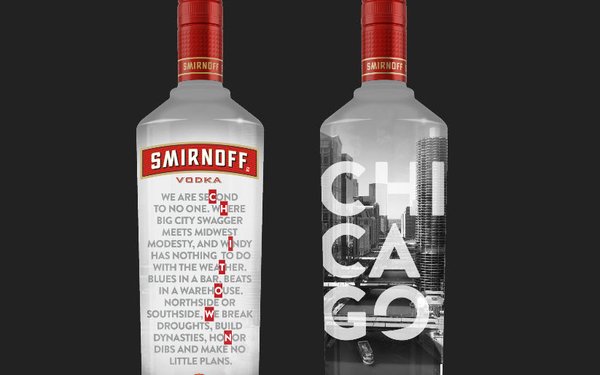 Rival vodka brands Smirnoff and Absolut are both out with new limited-edition bottles — but one is taking a highly localized approach, while the other is pushing a global unity theme.

The first two bottles, for California and Chicago (shown), will be available at retail through November.

Each design features a locally resonant image on the front and references to local language and customs on the back.

The Chicago bottle shows the city’s skyline on front, and bears this text on the back: “We are second to no one. Where big city swagger meets Midwest modesty, and windy has nothing to do with the weather. Blues in a bar. Beats in a warehouse. Northside or Southside. We break droughts, build dynasties, honor dibs and make no little plans.” (In Chicago, “dibs” refers to laying claim to a shoveled-out parking space by putting chairs, laundry baskets or other items in the space.)

Some letters are highlighted in red, so that read vertically, they spell out “Chi-Town.”

The California bottle features palm trees on the front and this text on the back: “We are the West Coast. Sunkissed and star-studded. Laid back but hustling hard. The West Side is always down to ride. Tech in the valley, gold in the hills. We make our own waves. From the stars in our eyes to the silver screen, we’re all dreamers.”

The red-highlighted letters spell out “We are the best coast.”

Meanwhile, Absolut — long known for limited-edited bottles designed by noted artists — has just released an “Absolut World” version that “aims to bring people together by defying the distances between us and carving out new connections across international borders,” according to the brand.

The neon-colored “love, peace and togetherness” bottle design, by Swedish illustrator Kari Modén, is being sold exclusively in duty-free stores.

It’s part of a global campaign from parent Pernod Ricard encouraging people around the world to take selfies and share tips about the hotspots and hangouts they love within their home cities.

Once uploaded, the selfies become part of a mosaic of faces of participants, along with their names, locations, and hotspot recommendations.

Each participant can zoom his or her facial image to reveal the details of the people that make it up.

“The platform will connect travelers from all around the world and unlock experiences that bring people together,” explained Lisa McCann, brand director, Pernod Ricard Global Travel Retail.

Absolut is no stranger to the hyper-local approach, however.

In fact, Smirnoff and other competitors undoubtedly took note of its Manhattan-focused “Absolut Truth” campaign, launched last fall, which used neighborhood-tailored out-of-home, video profiles of local denizens and other ads to “reintroduce” today’s New York City hipsters to the brand that was famously painted by Andy Warhol and Keith Haring in previous decades.