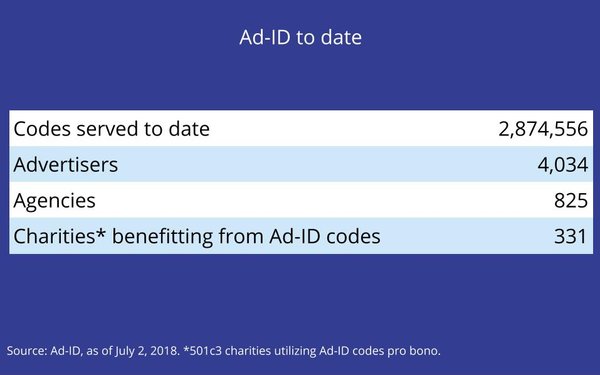 Amid one of the most contentious periods in the history of the ad industry’s two leading trade associations -- the Association of National Advertisers (ANA) and the American Association of Advertising Agencies (4A’s) -- a unique joint venture of theirs has quietly become a bright spot of Madison Avenue. Ad-ID, which celebrates its 15th anniversary today, has blossomed into an integral subcomponent for many of the world’s leading brands and their trading partners, largely thanks to a small team of technical and service pros who have taken it from concept to code to an indispensable part of the digital advertising and media ecosystem.

When Executive Director Harold Geller joined 15 years ago, it was a two-person operation. Today, it has more than quadrupled to a team of nine, but the real secret to its success has been its integration with a wide variety of industry technical specifications and codes designed to make the creation, placement, tracking and proof-of-performance of advertising assets a seamless and indelible process in a complex era of fast-moving digital ecosystems.

“We see ourselves as an ingredient,” Geller says, referring to Ad-ID’s focus on working with other industry technical and engineering groups to make the code interoperable with others as opposed to trying to make it a sole industry standard.

The goal, he says, is to avoid redundancies in the industry and focus on interoperability that creates rapid efficiency.

He cites an example that occurred when it introduced a new file format for serving digital ads. Geller convened a meeting of the top ad servers -- Google, Sizmek and Flashtalking -- and planned a two-day summit to hash it out.

Halfway into the first day, the fiercely competitive ad servers comprehended and agreed on the new file format and saw the logic of industry standardization so they could create their own competitive advantages around it.

The example illustrates how Ad-ID has worked, tackling complex technical integrations and focusing on developing APIs that seamlessly integrate Ad-ID as way to save time and speed things up.

It may not sound sexy, but in a world of increasing complexity, Ad-ID has saved brands and their agencies vast amounts of time and labor.

At its simplest level, it has enabled brands and agencies to avoid “rekeying” data the “20 to 30” times that would have been necessary to manually insert codes in the various stages of production and trafficking a typical TV commercial or video ad.

In addition to speeding processes up, the impact has been to reduce discrepancies that occur from manual mistakes and to redeploy people into more meaningful parts of the process and organization.

Geller says Ad-ID’s next big areas of focus are in determining how to adapt the code to dynamic creative versioning -- where there can be thousands of iterations of a primary ad -- as well as new platforms like OTT, IoT, AR, etc.

Along with its technical engineering, the Ad-ID team has had to provide a fair amount of service and business development in order to get adoption.

Currently, it has more than 4,000 advertisers using the code, which Geller estimates is less than half of its target of 10,000 advertising spending $1 million-plus annually.

“There are very few holdouts of advertisers spending more than $500 million,” he says, and the main reservation he says, is that they simply don’t understand the value of integrating a standardized industry code for tracking and trafficking their advertising assets.

The other main benefits, aside from labor costs and mistakes, is avoiding redundancies -- especially excessive frequency -- in media scheduling.

Asked where he would like Ad-ID to be 15 years from now, Geller says, “I’d like to see it become more of an international entity.”

In the meantime, the joint-venture has been an area of positive common ground for the ANA and 4As -- and one that has actually become a small profit center.