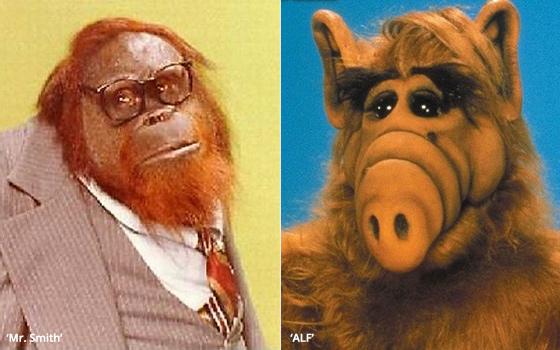 I was only kidding.

It is doubtful that the idea for an “ALF” reboot was influenced by some of the TV Blogs posted here over the last two years in which remaking “ALF” was positioned clearly as a joke.

In the blogs, the idea was intended to represent a fanciful and extreme example of how far today's TV reboot craze might go if it is not restrained.

And yet here we are: According to published reports on Thursday, Warner Bros. Television is making a new “ALF” for the modern age. A Hollywood Reporter story says the new “ALF” will have the furry, outspoken title character returning to Earth and taking up residence with a new family.

I suppose that means that the first “ALF” -- which ran from 1986 to 1990 on NBC -- ended with a touching finale in which ALF went home to the planet Melmac. Sorry, but I do not remember this.

Now, please raise your hand if you have yearned since 1990 to learn whatever happened to ALF and how he is doing today. None of you? Well, evidently the producers of this new “ALF” would disagree. They must assume millions want to learn these things. This is debatable.

For the record, the TV Blog first raised the possibility of an “ALF” revival -- in a wholly speculative way -- in a blog posted here in September 2016 that derided the reboot trend. The focus of that blog was the new “MacGyver,” which was then about to premiere on CBS.

The headline that day was composed in the form of four questions: "‘'MacGyver’? Really? What's Next? The New Adventures Of ALF?" Well, now we have an answer to the last two of them.

“ALF” was next suggested as a reboot idea too absurd to ever be taken seriously (wrong again!) last January in a blog that was written following the announcement that CBS would be producing a new “Murphy Brown.” The “Murphy Brown” reboot, with Candice Bergen, is scheduled to premiere September 27.

That blog was headlined: “Class of ’88: But Can ‘Murphy Brown’ Stay Classy In ’18?” The headline referred to the year the first “Murphy Brown” premiered. The “Stay Classy” phrase was intended to invoke memories of the fictional local news anchorman Ron Burgundy (played by Will Ferrell, in the “Anchorman” movies), whose catchphrase was “Stay classy, San Diego.”

Headshots of Mr. Belvedere (the late Christopher Hewitt), Murphy Brown (Bergen) and ALF were displayed to make the point that this was the TV environment in which “Murphy Brown” first premiered 30 years ago.

The photos were never intended to suggest that anyone should now go ahead and remake “ALF” or “Mr. Belvedere” (which will probably be next).

With a main character that was really just a fuzzy puppet, “ALF” was one of the more far-out shows to premiere during the 1980s. Another example was the often-maligned “Manimal,” the NBC series that lasted about three months in fall 1983 about a man who could transform himself into various animals for the purposes of fighting crime.

Attention, networks and producers: Please do not remake “Manimal.”

Another was “Mr. Smith,” which I just learned on Wikipedia ran approximately for the same length of time in Fall 1983 on NBC as “Manimal.” Clearly, NBC was not having a very good fall that year.

“Mr. Smith” was about an orangutan (pictured above) with a very high I.Q. who could also talk -- the result of his being used in some sort of secret government experiments. On the show, he ended up in Washington as a political adviser. An orangutan as a political consultant? On second thought, maybe that's not so farfetched!

The thing is, in today's media and political climate, why not remake “Mr. Smith” too? If ALF is coming back to Earth, and Murphy Brown is coming back to TV news, the way is now clear for Mr. Smith to go to Washington one more time.

entertainment, tv
2 comments about "Say It Ain't So! Alas, It Is So: They Are Making A New 'ALF'".
Check to receive email when comments are posted.
Read more comments >
Next story loading