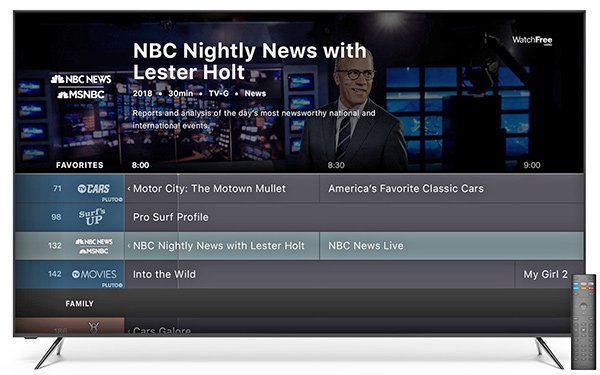 The television maker Vizio is launching a free, ad-supported streaming video service, WatchFree, which it created in conjunction with the streaming video provider Pluto TV.

Pluto TV will power the service, providing content from partners like NBC News/MSNBC, Fox Sports, and Gordon Ramsey, and channels like Pluto TV movies and News 24/7.

SmartCast is built on top of Google’s Chromecast platform, allowing for direct access to apps like DirecTV Now, Netflix and Crackle, though most research shows that households are increasingly turning to multiple connected TV devices to consume content.

It is that splintered ecosystem that Vizio is hoping will give it marketshare among the free streaming services available.

WatchFree will be baked into all TVs using Vizio’s SmartCast user interface, and will be accessible via the “input” button. In other words, when users click to switch between their cable box, video game console and streaming boxes, WatchFree will be presented as an option alongside those inputs. By doing so, Vizio is betting that it can convert a percentage of its TV buyers into watchers, gaining a piece of the advertising pie in the process.

For Pluto TV, the deal means substantial exposure and a piece of that ad pie as well.