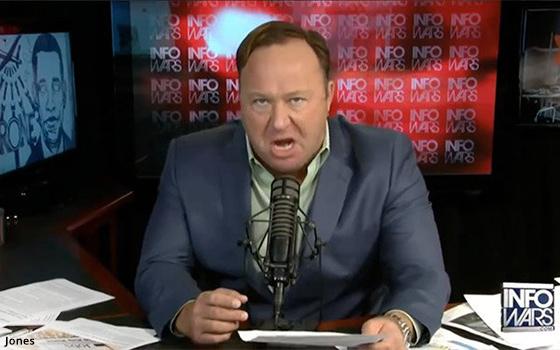 Conspiracy theorist Alex Jones, who on Monday was tossed off several social media platforms, has also lost his email service. MailChimp has terminated Jones’ InfoWars account, saying it violated its terms of service.

Jones is known for his conspiracy theories regarding 9/11 and Sandy Hook, and for using his InfoWars platform “to push for violence,” CNET alleges.

“MailChimp doesn’t generally comment on individual users or accounts, but we’ll make an exception today. MailChimp notified Infowars that their accounts have been terminated for violating our Terms of Service, which make it clear that we don’t allow people to use our platform to disseminate hateful content.”

It continues: “We take our responsibility to our customers and employees seriously. The decision to terminate this account was thoughtfully considered and is in line with our company’s values.”

MailChimp would not comment on the extent of its relationship with Jones or the timing of the cutoff. But InfoWars apparently was still able to send transactional emails on Tuesday afternoon, when this reporter received a newsletter subscription confirmation.

As reported by MediaPost’s Laurie Sullivan on Monday, Spotify removed hundreds of episodes of “the Alex Jones Show,” citing its policies on hate speech. In addition, Facebook said it deleted four pages belonging to Jones for the same reasons. And Apple removed all episodes and links leading to The Alex Jones show.

However, these moves have also raised the issue of freedom of speech. “Was it a long overdue crackdown or a conspiracy of censorship?” CNET asks of the 24-hour barrage of online terminations. Others wonder why all the big tech firms acted at the same time. Twitter has not terminated Jones.

According to Fox, Jones texted that these actions by the big-tech companies are "a counter-strike against the global awakening."

"We've seen a giant yellow journalism campaign with thousands and thousands of articles for weeks, for months misrepresenting what I've said and done to set the precedent to de-platform me before Big Tech and the Democratic Party as well as some Republican establishment types move against the First Amendment in this country as we know it," Jones said, the Post continues.

Other accounts say that InfoWars calls these actions “a coordinated communist-style crackdown.”

It 's not clear why the big-tech companies all acted at the same time.

This is not the first attempt by MailChimp to police email content. Earlier this year, it banned cryptocurrency advertising, saying that it violated its acceptable use policy.