What Serves The Public Conversation Best 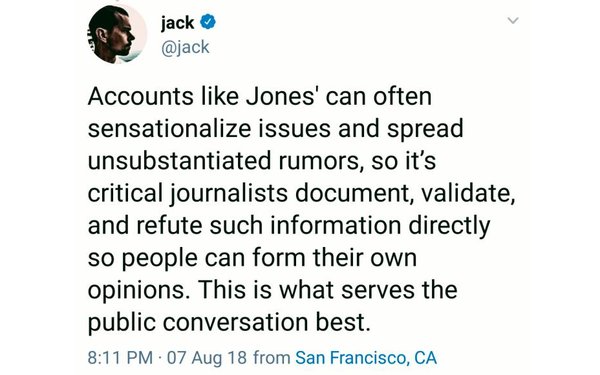 Hate speech, like art or obscenity, often is in the mind of the beholder. To my mind, Alex Jones’ qualifies, and not just because I hate it. But because it is an insidious form of hate speech that skirts the line of explicit, imminent threats in favor of longer-term and more underlying ones.

He may not have outwardly advocated to incite violence toward any groups or individuals, but he routinely incites groups and individuals in a way that undermines the security of others, often the victims of actual violence.

His “false flag” attacks on the Sandy Hook and Parkland school shootings don’t just pour salt into sensitive wounds, they desensitize society from taking actions that would create laws, policies and social norms to prevent them from happening again. As the name of his “show” honestly states, he is conducting “InfoWars” on our sensibilities.

And the only sensible thing to do in response, is to ignore and marginalize what he does.

The worst part of the current debate over whether and which platforms should ban his content is that it is giving Jones more attention than he should have. Fringe conspiracy media mongers have always existed, and the First Amendment protects their right to publish as long as it isn’t explicit hate speech or incites violence.

However, it does not protect his right to be distributed by commercial media platforms -- especially big digital “social media” ones that have amplified his voice, expanded his audience and helped disrupt our common sense.

Kudos to Apple, Facebook and Google/YouTube for exercising some sense. While they have not explicitly banned Jones’ “Info Wars,” they have taken responsibility for censoring segments that step over the line.

Twitter, once again, is acquiescent, asserting its principle for being an open platform for social discourse, even when it’s so off course that it undermines the society it’s supposed to serve.

“We know that’s hard for many but the reason is simple: he hasn’t violated our rules,” Twitter CEO @jack Dorsey tweeted Tuesday in defense of its decision.

In the string, he goes on to acknowledge how Twitter “has been terrible at explaining our decisions in the past” and goes on to assert: “We’re fixing that. We’re going to hold Jones to the same standard we hold to every account.”

Actually, I know that’s not true, because Twitter does not have a single standard for moderating accounts.

I know this because a while back, I made a case for suspending @realDonaldTrump, at least while he is @POTUS, since his tweets are so powerfully disruptive that they incite violence and inflict pain on both groups and individuals.

Twitter never responded to me, but shortly after, it stated it has a separate policy for treating the accounts of “world leaders.” In response to that, I asked what Twitter’s policy was for defining who is a “world leader.” Again, there was no response.

“Accounts like Jones’ can often sensationalize issues and spread unsubstantiated rumors, so it’s critical that journalists document, validate and refute such information directly so people can form their own opinions,” @jack goes on to tweet in his string, passing the buck to others to set the record straight.

“This is what serves the public conversation best,” he concludes, then posts a link to Twitter’s ridiculously long, terse and incredibly subjective “The Twitter Rules,” which is ironically subtitled, “A Living Document.” You can read them in their entirety below.

If you ask me, @jack’s living in the past and hiding behind old Silicon Valley rules that no longer apply.

The idea that digital media platforms are dumb intermediaries for end-to-end users no longer applies. At a time when more Americans get their information -- real news, fake news and the information war-mongering kind -- from social media than they do from traditional, regulated media like TV, radio and newspapers, it’s time to rethink their role and their responsibility as gatekeepers. Otherwise, we should throw away their keys.

We believe that everyone should have the power to create and share ideas and information instantly, without barriers. In order to protect the experience and safety of people who use Twitter, there are some limitations on the type of content and behavior that we allow. These limitations are set forth in the Twitter Rules below.

All individuals accessing or using Twitter’s services must adhere to the policies set forth in the Twitter Rules. Failure to do so may result in Twitter taking one or more of the following enforcement actions:

If you attempt to evade a permanent suspension by creating new accounts, we will suspend your new accounts.

Please note that we may need to change these Rules from time to time and reserve the right to do so. The most current version is always available at: https://twitter.com/rules.

The policies set forth in these Twitter Rules govern organic content on our platform. To learn more about the rules which govern ads and promoted content, please review our Ads policies.

Trademark: We reserve the right to suspend accounts or take other appropriate action when someone’s brand or trademark, including business name and/or logo, is used in a manner that may mislead or confuse others about your brand affiliation. Read more about our trademark policy and how to report a violation.

Copyright: We will respond to clear and complete notices of alleged copyright infringement. Our copyright procedures are set forth in our Terms of Service. Read more about our copyright policy.

We consider graphic violence to be any form of gory media related to death, serious injury, violence, or surgical procedures. We consider adult content to be any media that is pornographic and/or may be intended to cause sexual arousal. Learn more about our media policy.

Twitter allows some forms of graphic violence and/or adult content in Tweets marked as containing sensitive media. However, you may not use such content in your profile or header images. Additionally, Twitter may sometimes require you to remove excessively graphic violence out of respect for the deceased and their families if we receive a request from their family or an authorized representative. Learn more about how to make such a request, and how to mark your media as sensitive.

You may not use our service for any unlawful purposes or in furtherance of illegal activities. By using Twitter, you agree to comply with all applicable laws governing your online conduct and content.

At times, we may prevent certain content from trending. This includes content that violates the Twitter Rules, as well as content that may attempt to manipulate trends. Read more about what we allow and do not allow to trend.

You may not submit, post, or display any video content on or through our services that includes third-party advertising, such as pre-roll video ads or sponsorship graphics, without our prior consent.

You may not use badges, including but not limited to the “promoted” or “verified” Twitter badges, unless provided by Twitter. Accounts using unauthorized badges as part of their profile photos, header photos, display names, or in any way that falsely implies affiliation with Twitter or authorization from Twitter to display these badges, may be suspended.

Selling usernames: You may not buy or sell Twitter usernames.

Please note that Twitter may also remove accounts that are inactive for more than six months. Learn more about username squatting.

We believe in freedom of expression and open dialogue, but that means little as an underlying philosophy if voices are silenced because people are afraid to speak up. In order to ensure that people feel safe expressing diverse opinions and beliefs, we prohibit behavior that crosses the line into abuse, including behavior that harasses, intimidates, or uses fear to silence another user’s voice.

Context matters when evaluating for abusive behavior and determining appropriate enforcement actions. Factors we may take into consideration include, but are not limited to whether:

Violence: You may not make specific threats of violence or wish for the serious physical harm, death, or disease of an individual or group of people. This includes, but is not limited to, threatening or promoting terrorism. You also may not affiliate with organizations that — whether by their own statements or activity both on and off the platform — use or promote violence against civilians to further their causes.

Abuse: You may not engage in the targeted harassment of someone, or incite other people to do so. We consider abusive behavior an attempt to harass, intimidate, or silence someone else’s voice.

Unwanted sexual advances: You may not direct abuse at someone by sending unwanted sexual content, objectifying them in a sexually explicit manner, or otherwise engaging in sexual misconduct.

Hateful conduct: You may not promote violence against, threaten, or harass other people on the basis of race, ethnicity, national origin, sexual orientation, gender, gender identity, religious affiliation, age, disability, or serious disease. Read more about our hateful conduct policy.

Hateful imagery and display names: You may not use hateful images or symbols in your profile image or profile header. You also may not use your username, display name, or profile bio to engage in abusive behavior, such as targeted harassment or expressing hate towards a person, group, or protected category.

Intimate media: You may not post or share intimate photos or videos of someone that were produced or distributed without their consent. Read more about intimate media on Twitter.

You may not impersonate individuals, groups, or organizations in a manner that is intended to or does mislead, confuse, or deceive others. While you may maintain parody, fan, commentary, or newsfeed accounts, you may not do so if the intent of the account is to engage in spamming or abusive behavior. Read more about our impersonation policy.

We strive to protect people on Twitter from technical abuse and spam.

To promote a stable and secure environment on Twitter, you may not do, or attempt to do, any of the following while accessing or using Twitter:

Any accounts engaging in the following activities may be temporarily locked or subject to permanent suspension:

Accounts under investigation or which have been detected as sharing content in violation of these Rules may have their account or Tweet visibility limited in various parts of Twitter, including search. To learn more about situations in which content may be restricted on Twitter, please see our support article on search rules and restrictions.