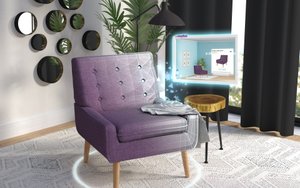 Wayfair is moving into mixed reality, with a spatial computing trick that allows tech-loving consumers to bring furniture to life in their homes.

The announcement comes against a backdrop of changing focus for the furniture giant, including ballooning sales, larger losses and the confirmation that the e-commerce darling will open its first physical store.

The MR experience runs on Helio, the first-ever spatial computing web browser by Magic Leap, and is available now on Magic Leap One’s creator edition. (Some tech writers have been underwhelmed by Magic Leap’s latest.)

For Wayfair, which has been using augmented- and virtual-reality tools to help shoppers for some time, the mixed-reality approach is “a completely new way to shop for home with a spatial browsing experience that will shape the next evolution of retail,” stated Steve Conine, the Boston-based company’s co-founder and co-chairman, in its announcement.

Users place the browser anywhere, then launch Wayfair’s MR experience with a single tap. They can browse through Wayfair’s vast array of furnishings, then pull items into their physical space, and look at them as true-to-scale, 3D products. From there, they can rotate and shift products around, experimenting with different looks and layouts.

The announcement comes a week after Wayfair’s latest quarterly results, revealing sales that blew past expectations, jumping 49% to $1.6 billion. The gains represent its largest year-over-year dollar growth yet and includes Way Day, the one-day shopping event introduced in April, which it says was the biggest revenue day ever.

But losses mushroomed too, rising from $38.9 million to $100.7 million, bigger than analysts had predicted. That’s reviving the ongoing debate: If Wayfair is so successful, shouldn’t it start making money one of these days?

Its executives seem untroubled, and many observers point out that rival Amazon has faced the same criticism. “We are delighted with the progress that we are making and the way in which we are positioned to keep taking market share as dollars shift online,” noted CEO and co-founder Niraj Shah in its announcement.

Wayfair is currently spending 10.7% of sales on advertising, he says, but one of the risks if its sales growth slows is that it will need to up that spending “as churn rates increase and repeat purchase rates slow.”

Meanwhile, Furniture Today reports that Wayfair will open a 20,000-square-foot physical store in Florence, Kentucky early next year. The company already has a large distribution center in the region, and the store is set to retail returns and closeouts.

While an executive tells the trade publication it has no further plans to open real stores, other e-commerce players are doing so at a rapid pace.

Amazon has many different physical-store formats in place. Warby Parker and Bonobos are also shifting into real-life retail. And this week, Casper, the online mattress seller, announced it is opening 200 stores in the next three years.