'The Boston Globe' Leads Call To Protect A Free Press 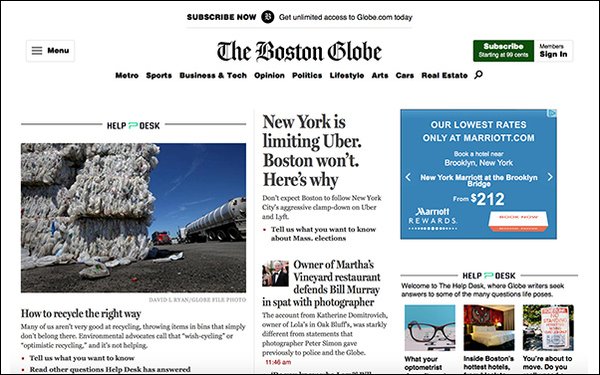 Since beginning his presidential campaign, Donald Trump and his aides have methodically pushed to dismantle a free press in the U.S.

While running for office, he ordered his staff to ban entire media organizations, a tactic he and his aides have continued in office. Last month, the White House retaliated against CNN reporter Kaitlan Collins by banning her from an open media event. And last spring, the Department of Homeland Security announced it was compiling a database of journalists and “media influencers.”

Following his disastrous Helsinki meeting with Russian president Vladimir Putin, Trump publicly called the press the “enemy of the people” — and his tirade hasn’t slowed since.

Such totalitarian tactics have sounded an alarm among the nation’s journalists and news outlets.

In an effort to unite the media and raise national awareness about the war against it, The Boston Globe has issued a “call for action to protect free press.” The outlet is reaching out to editorial boards across the country to plan a coordinated response.

On August 16, The Boston Globe is asking news outlets to publish editorials about the dangers of the administration's attacks on the press. It will also publish a response.

The call to action is not limited to outlets with particular political leanings.

Rather, The Globe hopes that members of the press will stand in “common defense of their profession and the vital role it plays in government for and by the people” and consider how Trump’s attack on journalism impacts the public nationwide.

In 1974, influential 20th-century political theorist Hannah Arendt, famous for her book "The Origins of Totalitarianism," who coined the phrase "banality of evil," said in an interview: “A people that no longer can believe anything cannot make up its mind. It is deprived not only of its capacity to act, but also of its capacity to think and to judge. And with such a people, you can then do what you please.

Arendt’s statement speaks to a new generation. An ill-informed, frightened public is precisely the audience an authoritarian president hopes to cultivate. Losing trust in a free press, such people have historically turned to the cult of personality, leaving unprincipled leaders with unprecedented powers and control.