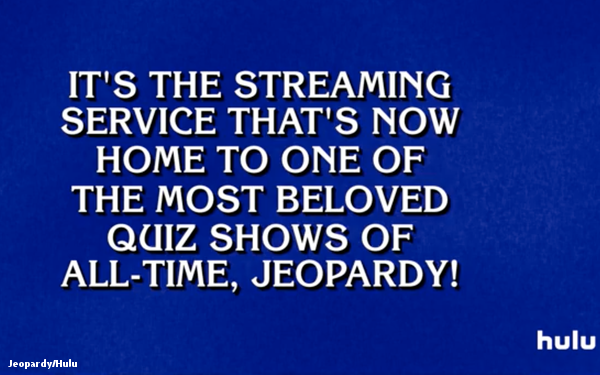 The long-running game show “Jeopardy!” made its subscription streaming debut on Hulu this past Friday, per a deal with streaming service and producer Sony Pictures Television.

The deal will see Hulu curate 60 episodes of the program, including events like the Tournament of Champions, Battle of the Decades and College Championship, as well as some classic episodes with popular contestants like Ken Jennings and Brad Rutter.

Episodes will be regularly refreshed to keep viewers coming back to test their trivia knowledge.

The Hulu deal marks the first time "Jeopardy!" will stream on a subscription on-demand service, but it is actually the second streaming deal for the show.

Sony’s own Crackle platform previously streamed some classic episodes of the program, and the service also streamed a spinoff, “Sports Jeopardy!,” that was hosted by Dan Patrick.

Hulu says that “Jeopardy!” Is one of the “top five broadcast programs” on its Hulu with Live TV service, reinforcing the 35-year-old show’s popularity and staying power.

Unlike competitors like Netflix and Amazon Prime Video, Hulu has been more willing to venture into other genres, including game shows and live TV.