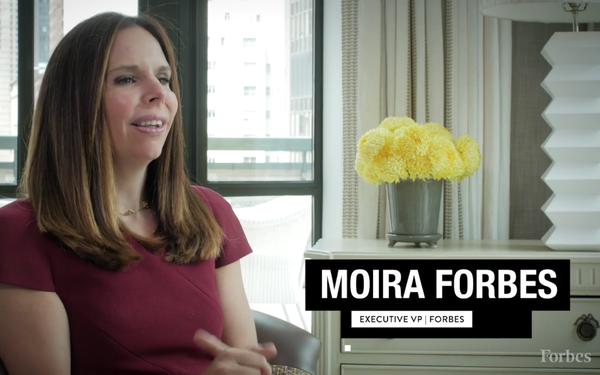 Moira Forbes is expanding her video interviews with female influencers and business leaders with a 12-episode serialized show called “Success with Moira Forbes.”

Forbes has spent nearly a decade on the topic. She helped to launch the ForbesWoman platform, dedicated to covering women and leadership, as well as the Forbes Women’s Summit, which just had its sixth annual conference this summer.

“Given the events of the past 18 months, I saw conversations about diversity and inclusion and accelerating opportunities for women pick up,” Forbes said. “This is an opportunity to engage with this community and really connect in a dynamic way through this video series.”

Forbes wanted to “bring together a collection of voices and hear their stories and their insights… for the broader Forbes community.”

She wanted to touch on topics that are “top of mind” for the community of women the platform reaches. A goal of the series is to identify core themes and “conversation pillars” around navigating a career and “striking out on your own.”

“What are the common qualities that unite these women that have achieved such uncommon success?” Forbes queried.

Lake, for example, admits the difficulty of getting investors to sign onto Stitch Fix. Her business idea — a subscription-based personal shopping service that sends clothes to your door — was made for women and being pitched by a woman. The venture capital world is male-dominated, Forbes added. Stitch Fix’s current market cap is now nearly $3 billion.

The interview has been watched nearly 10,000 times since it premiered about a week and a half ago.

Forbes stressed that “women of influence today” are not defined by their corner offices. Women’s careers are no longer linear, because few people are staying at a company for decades to climb the ranks.

Forbes calls it a “nontraditional career path. We wanted to identify women who had built meaningful businesses at scale, or had broken new barriers, whose voice has had impact in a powerful or unexpected way to reshape an industry or reshape mind,” she said.

These women are painting a different picture of success, overcoming failures and “navigating critical junctures” to “build that muscle of resilience” to get to where they are, she added. At the same time, they are balancing families, communities and causes important to them.

The show also publishes “Success in 60 Seconds,” one-minute clips cut from the longer interview to serve as a how-to on specific career topics. Forbes says this shorter format appears on different platforms. “There are different ways people are consuming content,” she said. “People are hungry for short, easy-to-consume pieces of content.”

The shorter clips can get shared across platforms, giving the content a "broader reach."

The series will live across “the entire Forbes ecosystem,” on the page hub for the show, on the Forbes video network, streamed across relevant channels on Forbes.com and on social platforms like Twitter and LinkedIn.

Forbes is the daughter of Steve Forbes, chairman and editor-in-chief of Forbes.