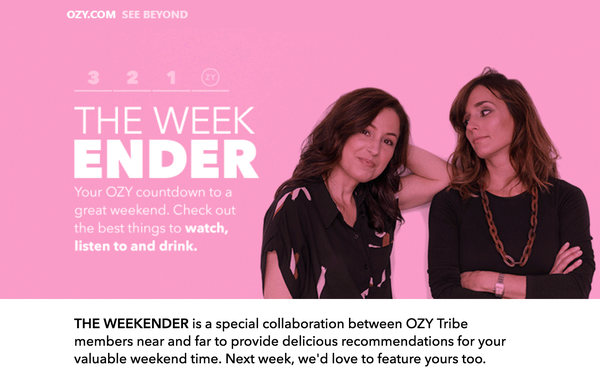 Building on its stable of successful newsletters, Ozy launched its fourth today, called “The Weekender.”

“The Weekender” will cover the latest trends across food, drink, music, cooking, fashion and entertainment, with sections organized by titles like “What to Watch,” “What to Hear” and “What to Eat.”

The first issue features stories about Israeli drama "Fauda," a vodka made from San Francisco fog, and a suggested podcast called “Don’t @ Me” by Justin Simien, creator of Dear White People, among other recommendations from Ozy editorial staff.

Ozy Media CEO and cofounder Carlos Watson described “The Weekender” as “vaulting [readers] ahead with little-known places to explore and experiences that take them out of their comfort zone.”

“The Weekender” joins Ozy’s other newsletters, already popular with readers. They include “The Presidential Daily Brief,” a compilation of the most important and interesting stories of the day, “The Special Briefing,” featuring a deep dive into a single story that dominated that week’s news cycle, and the “Daily Dose,” which is filled with original international reporting from Ozy.

Ozy reports open rates of 30% and clickthroughs of 15% across its newsletters, which are above industry standards.

Since launching in 2013, Ozy Media counts 40 million monthly users across its site and 4 million subscribers to its newsletters.