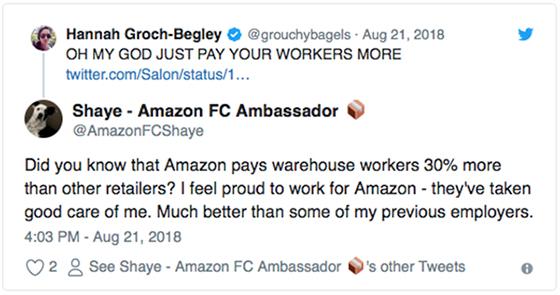 Amazon has been using social media to employ an army of professionals to defend the company’s work ethics on Twitter.

The online community of FC Ambassadors, which TechCrunch describes as “Stepford-like” real-life workers, tweet about how everything is well with its warehouse workers.

Gay, an Amazon FC Ambassador on Twitter who goes by the name of @QThePinkYoshi, just wants to assure everyone that the FC Ambassadors are not bots and are not getting paid. “We take the job seriously and I’m not holding up a script that was given to me to say, ‘We get paid well and are treated fairly.’”

The warehouse ambassadors, who have made a customer service commitment, tweet back at criticism of working conditions at the marketplace.

The Twitter users jump to the defense of Amazon’s facilities. Some list off stats about Amazon’s pay compared to other companies. TechCrunch identified 15 accounts, all with Amazon smiles as their backgrounds and “FC Ambassador” after their name, complete with job titles, locations, and the duration of time they have been with the company.

All FC Ambassadors tweet positive messages about how great it is to work at an Amazon warehouse and assure that those who communicate with them are not forced to do so.

Amazon claims its FC Ambassadors are full-time company employees and hired to educate the public about work at its facilities. The move follows recent press reports about conditions at its fulfillment centers.

The Washington Postreported that thousands of Amazon workers receive food stamps and that Bernie Sanders wants the marketplace to pay.

Sanders plans to introduce a bill in the Senate on September 5 that would impose a 100% tax on government benefits received by workers at companies with 500 or more employees. “For example, if an Amazon employee receives $300 in food stamps, Amazon would be taxed $300,” reports the publisher.

Carol -- a picker in Kent, Washington, who encourages those who come across her profile to tweet her -- says she makes a monthly bonus that comes out to more than $15 per hour, but she gets a raise every six months for the first two years.