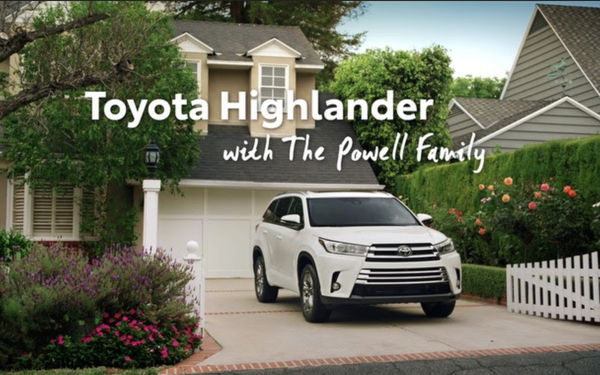 A multiplatform social media and broadcast campaign for Toyota centers around the moments that inspire spontaneous family adventures enjoyed in the comfort of a 2018 Toyota Highlander.

Burrell Communications, Chicago worked with The Colonie to create an array of deliverables that include cinemagraphs, GIFs, and square video optimized for Facebook, as well as traditional 16:9.

The campaign includes optimizations for Facebook,from Carousels and Canvases to Instagram stories. It features 30-second  spots "Inspiration" and "Heroes,"’ which is also airing as a broadcast spot. It also includes a 15-second spot, "Falling" and two 6-second spots, ‘"Jump In,"  and "Dull Moments."

“Heroes” opens with the young son running through the Powell family’s house donning a makeshift cape, pretending to be a superhero. The action cuts to the family in their Toyota Highlander, with “The Hero” theme song playing on its JBL Premium Audio System as they hit the road. The SUV comes to a stop at a festive event where superhero enthusiasts in full costume have gathered. As the Powells exit their Highlander to join in, we see that they’re all dressed in elaborate superhero garb. The spot closes with the tagline, “Toyota Highlander, Let’s Go Places.”

The same young son jumps around in a horse mask in “Inspiration.” Seeing their son at play is all it takes for the mom and dad to load their kids in their Highlander and drive to a stable where, to the brother and sister’s delight, they get their first riding lesson. The spot ends with the tagline, ‘“From Inspiration to Destination. There's More to Discover in the 2018 Highlander.”

The 15-spot “Falling” finds the family having fun at an indoor skydiving facility. Later the kids share a laugh as they view a video of their dad while charging their devices on the USB ports in the rear of the Highlander’s center console.