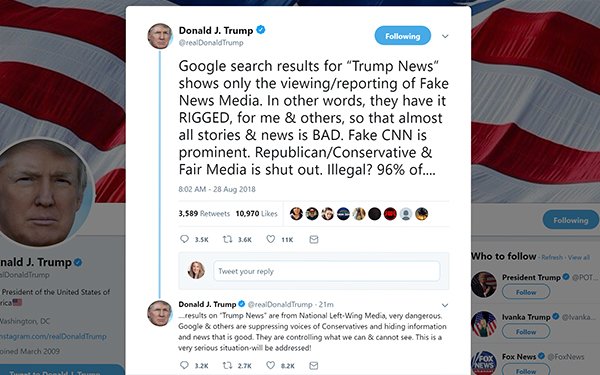 “Google search results for “Trump News” shows only the viewing/reporting of Fake New Media. In other words, they have it RIGGED, for me & others, so that almost all stories & news is BAD. Fake CNN is prominent. Republican/Conservative & Fair Media is shut out. Illegal? 96% of..,” Trump tweeted on Twitter Tuesday morning.

The allegation may have originated from headlines and news articles like “96 Percent of Google Search Results for ‘Trump’ News Are from Liberal Media Outlets.” And while that may be true when it comes to ranking high in query results based on the keyword "Trump," search experts know better whether or not someone believes in the president’s policies.

“Trump made a similar claim during the election saying the autofill wouldn’t fill in for ‘crooked Hillary,’ but would fill in for some derogatory statements about him,” Kagan said.

Google designed the autofill in the search box to filter our certain words. Words like “crooked,” for example, he said.

“When users type queries into the Google Search bar, our goal is to make sure they receive the most relevant answers in a matter of seconds,” wrote a Google spokesperson in an email to Search Marketing Daily. “Search is not used to set a political agenda and we don't bias our results toward any political ideology.”

Each year, Google releases hundreds of improvements to its search algorithms to ensure they surface high-quality content in response to users' queries.

Optimizing content to appear high on the page in search continues to become a valuable skill, as marketers know. Google only gives hints as to some of the triggers required for a publisher’s content to rank high in the results on page one.

Part of the query ranking of a keyword for news in search results relies on personalizing the results based on past browsing and searching history. This means the algorithms running search skew toward the historic searches and clicks.

The ranking of a publisher’s site in search results also relies on the quality of the website, which helps to confirm legitimate news. Another key trigger relies on whether or not the site runs on HTTPS, a protocol called hypertext transfer protocol secure in which the “s” plays a key part to secure content and filter out hackers.

Earlier this year, Google hinted at a small ranking boost for sites making the transition from HTTP to HTTPS. In February 2018, Google said it would start labeling sites and webpages still using HTTP as “not secure” by summer 2018. For instance, foxnews.com is marked “not secure” because its website still runs on HTTP, not HTTPS.

On first glance it appears that sites like Fox News are de-emphasized in search results, but the reason centers on lousy SEO on the part of the publisher, said Marty Weintraub, founder of the marketing agency aimClear.

“Before anyone can complain about being pushed down in rankings, they need to fix their website,” he said.

Testing the theory In google.com, Weintraub used a new desktop browser window and new IP address clear of cookies, so Google’s algorithms couldn’t use his past search history to return query results.

“Fox News doesn’t acknowledge Trump in the headline of their articles, and that could have a whole lot to do with where its articles rank in Google search results based on using the keyword ‘Trump,’” he said.

Headlines from CNN, New York Times, NPR, the New Yorker, ABC News and others rank much higher on the page.